Celtic can go top of the Scottish Premiership with a win over Rangers on Wednesday night after Liel Abada's last-gasp strike gave them a 1-0 win against Dundee United at Parkhead.

The champions had slipped up with a 3-3 draw against Ross County at Dingwall earlier in the day to go five points clear but Ange Postecoglous's side spent most of the afternoon being frustrated by the disciplined visitors.

With seconds remaining of the 90 minutes and the Hoops down to 10 men after stand-in skipper Nir Bitton was sent off in the 81st minute by referee Euan Anderson for picking up his second yellow card, winger Abada fired in a dramatic winner.

The triumph took Celtic to within two points of Rangers ahead of the Old Firm game and a fixture which is traditionally tense and hard-fought has an extra layer of intrigue added.

For such a key match, Postecoglou had to choose from a depleted squad with captain Callum McGregor, Yosuke Ideguchi, Kyogo Furuhashi, David Turnbull and Albian Ajeti all out injured while Tom Rogic and Daizen Maeda were away on international duty.

Among those returning to the starting line-up were Republic of Ireland defender Liam Scales, while Anthony Ralston and Abada were also recalled.

Before kick-off Postecoglou and McGregor laid a wreath on the pitch in tribute to former Celtic title-winning manager Wim Jansen, who recently died, before a minute's applause.

United caused some early concerns and in the seventh minute Sporle came close with a drive from inside the box which Hoops keeper Joe Hart was pleased to see whizz past his far post.

Moments later, United's Calum Butcher foiled Giorgos Giakoumakis as the 27-year-old Greece striker, who scored in each of the last two games, was too slow to get his shot away.

Soon, the well-organised defence were deep in their own half and in the 27th minute Abada weaved his way into the United box but his angled-drive from close range was knocked away by Ben Siegrist.

The keeper was then injured preventing Giakoumakis getting a clean shot on goal from Abada's low cross to the near post but resumed after treatment.

Siegrist then parried a decent long-distance drive from Matt O'Riley, making his home debut following his move from MK Dons, before the midfielder missed a great chance, failing to hit the target from a James Forrest cross.

The Scotland winger and Scales stayed inside at the break, replaced by on-loan Portuguese winger Jota and left-back Josip Juranovic, and within moments Siegrist parried away O'Riley's header from a Jota cross.

United replaced injured defender Scott McMann with Ross Graham and the visitors stuck to their defensive tasks under increasing pressure during which Siegrist somehow managed to keep out Giakoumakis' strike from six yards with his foot.

Parkhead jangled with tension and nerves as Celtic kept up the tempo but with nine minutes remaining Bitton, booked earlier for a challenge on Tony Watt, was sent packing for a foul on United substitute Declan Glass just outside the Celtic box.

There was still a twist to come and at the death, Abada pulled Jota's cross out of the air and fired the ball high into the net. 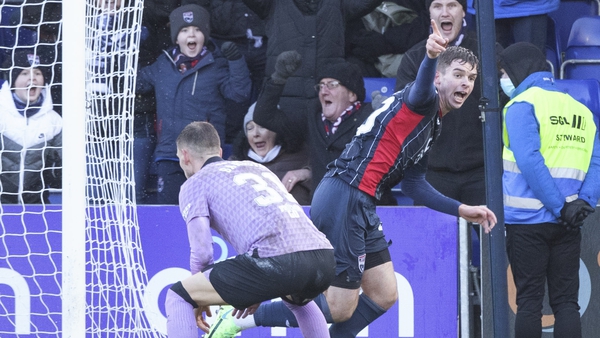