Italian police have launched an investigation after insulting and threatening banners aimed at Fiorentina striker Dusan Vlahovic appeared on Tuesday amid media reports that he could be set for a move to rivals Juventus.

A series of banners appeared outside Fiorentina's Artemio Franchi stadium in response to media reports that the 21-year-old Serbian, who is joint-top scorer in Serie A, has agreed a €75m switch to Turin-based club Juve.

One banner read: "Your guards won’t save your life gypsy. It's over for you."

Another called him a "modern mercenary", while others included obscene insults.

"The Digos [police Special Branch] of Florence is working on the case and carrying out thorough investigations to try and find the authors of the banners," a police spokesperson said.

"The Digos has also implemented all possible preventative measures to avoid the repetition of similar episodes."

Vlahovic joined Fiorentina in July 2018 from Partizan Belgrade in his native Serbia, and has developed into one of Europe’s most sought-after young strikers.

He was named Best Young Player in Serie A last season after scoring 21 goals, and is level with Lazio’s Ciro Immobile at the top of the league scoring charts this season with 17.

The Florence club announced in October that Vlahovic had turned down their offers of an extension to his deal that ran to June 2023.

On Tuesday, reports in the Italian media said Juventus had agreed a deal worth €75m for his services.

Fiorentina, who are seventh in Serie A, have a long-running rivalry with Juve, and currently sit six points behind the fifth-placed Turin side with a game in hand. 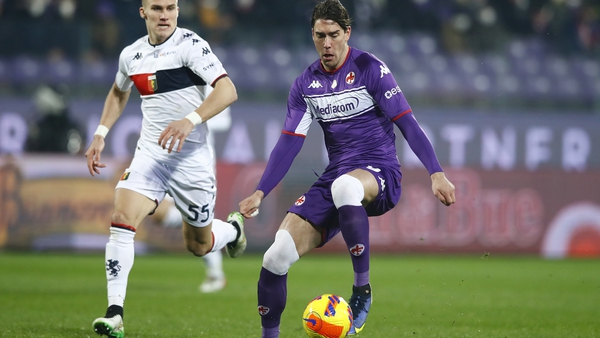