The Valencians were on course for a memorable win at the Bernabeu as they led 2-0 after 82 minutes, with goals from Lucas Boye and Pere Milla.

But Luka Modric got his side back in it from the spot and then Eder Militao made it 2-2 in the second minute of time added on as Carlo Ancellotti's men extended their lead at the summit to four points.

Xavi's side dominated the match but looked like being held until the Dutchman converted from close range near the end.

Napoli moved four points behind Inter Milan at the top of Serie A with a 4-1 win over 10-man Salernitana.

Juan Jesus, Amir Rrahmani, Dries Mertens and Lorenzo Insigne all scored as the Naples side made it four games unbeaten.

AC Milan are level on points with Napoli after earning a point in a stalemate with Juventus.

Milan had the better of the encounter, with Juve failing to have a shot on goal. 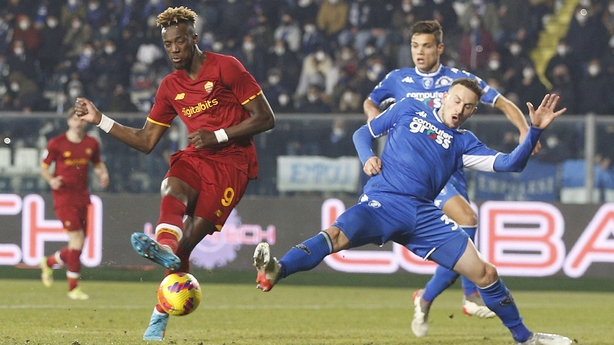 Tammy Abraham scored twice for Roma as they beat Empoli 4-2 to ease the pressure on Jose Mourinho.

Earlier, Fiorentina drew 1-1 with Cagliari and Torino and Sassuolo also played out a 1-1 draw, while Spezia were 1-0 winners against Sampdoria.

Bayern Munich eased to a 4-1 win over Hertha Berlin to cement their position of strength at the top of the Bundesliga.

Bayern made it eight wins from nine league games as Corentin Tolisso, Thomas Muller, Leroy Sane and Serge Gnabry all got on the scoresheet.

RB Leipzig's recovery continued with a 2-0 win over Wolfsburg, marking their third victory in a row as they climbed to sixth.

Paris St Germain enjoyed a comfortable 4-0 victory over Reims to maintain an 11-point lead at the top of Ligue 1.

Goals from Marco Verratti, Sergio Ramos and Danilo Pereira and a Wout Faes own goal made it plain sailing for Mauricio Pochettino's side.

Nice reclaimed second spot with a 2-0 win over Metz, with second-half goals from Khephren Thuram and Amine Gouiri.

Strasbourg were beaten 4-3 in a thrilling game with Bordeaux, while Nantes beat Lorient 4-2.

Ajax climbed above PSV to the top of the Eredivisie with a 2-1 win in Eindhoven as Noussair Mazraoui's 74th-minute goal settled the game.