Danny Welbeck grabbed a deserved point for Brighton as another Seagulls late show earned a 1-1 draw at Leicester.

The substitute levelled with just eight minutes left as the visitors again rescued a game which looked to be slipping away.

Graham Potter's side have scored after the 80th minute in five of their last nine games to snatch points.

Patson Daka had put the Foxes ahead immediately after half-time but they failed to hang on and narrowly avoided another late collapse.

Days after conceding two Steven Bergwijn stoppage-time goals to lose 3-2 to Tottenham they needed Youri Tielemans to clear off the line from Dan Burn and Kasper Schmeichel to save from Leandro Trossard to ensure they took a point.

It dented their lingering European hopes while a point will surely embolden the Seagulls, who remain four points above the 10th-placed Foxes. 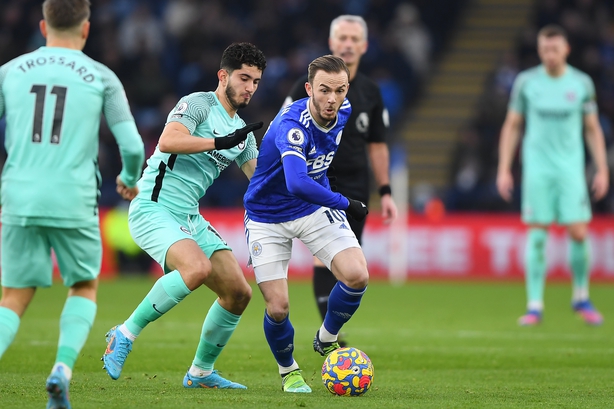 Still smarting from Wednesday's late collapse to Spurs the Foxes knew victory was crucial to close the gap to the top seven.

James Justin - in his first start for almost a year since suffering a serious knee injury against Brighton last February - enjoyed a lively start and teed up James Maddison, whose shot was saved by Robert Sanchez.

Chances were at a premium for Brighton but Trossard did try to pick out Jakub Moder only for Neal Maupay to attempt an acrobatic volley which was never going to trouble Schmeichel.

It was a rare opening for the visitors and the Foxes looked for a breakthrough with Maddison's free-kick brushing the sidenetting and Kiernan Dewsbury-Hall driving straight at Sanchez.

Draw specialists Brighton, who had shared the points in 11 of their previous 21 games, were solid when it mattered but sloppy on the ball.

They lacked the dynamism and inventiveness to unlock Leicester while they continued to invite pressure, gifting their hosts the ball before regrouping to save themselves.

Indeed, they created Leicester's best chance of the first half for them when, soon after blazing over from 18 yards, Alexis Mac Allister lost the ball to Harvey Barnes and he slipped in Ademola Lookman, who could only shoot too close to Sanchez.

Leicester had lacked precision themselves so it was fitting they grabbed the lead 30 seconds after the restart in scrappy fashion.

Adam Webster's loose long ball was seized upon by Dewsbury-Hall and his header found Maddison.

The midfielder fed Lookman, who failed to get a shot away but when the ball rolled to Maddison his effort was touched on by Barnes. 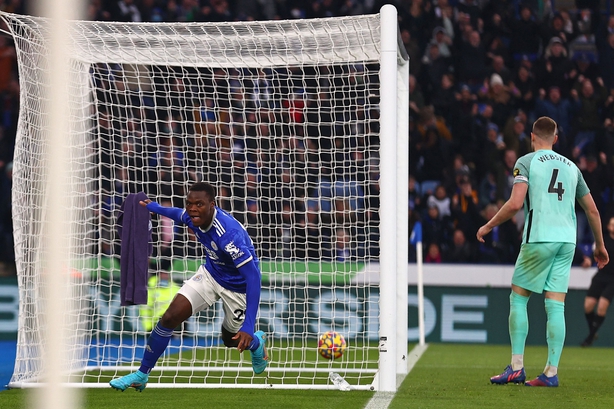 Sanchez was there to parry but he could do nothing to stop Daka following up from close range for his ninth goal of the season in all competitions.

Brighton needed more urgency if they were to avoid a rare away defeat and they eventually found another way to save the game.

It initially looked like there was to be no late comeback when Schmeichel kept out Welbeck's excellent header with 17 minutes left.

But the substitute was not to be denied nine minutes later when he snatched a point.

Maupay's superb deep cross found the striker and his fine downward header beat the prone Schmeichel via the post.

It sparked panic in Leicester's backline - the memories still fresh from their Tottenham collapse - and Tielemans cleared Burn's header off the line soon after.

Brighton continued to press and only Schmeichel's smart stop from Trossard kept it level.