Jurgen Klopp has hailed Caoihmin Kelleher's evolution from being "a skinny boy from Ireland" into a high-quality Liverpool goalkeeper.

It's been a season of impressive development for the Corkman, who continues to battle Gavin Bazunu for the Ireland No 1 spot while deputising for Alisson Becker at club level.

Kelleher caught the eye once again as the Reds beat Arsenal 2-0 at the Emirates to book their place in the Carabao Cup final, and Klopp was happy to air his satisfaction with the 23-year-old's improvement.

"We're more than happy with him, absolutely, " said Klopp. "This is a [goalkeeping coach] John Achterberg project. There were a lot of steps to go [when] I arrived here [in 2015] and saw him for the first time - a skinny boy from Ireland. Standing in his big goal, it was like, 'okay... it could take a while until he fills it in'.

"Since then he's made incredible steps and now he is a top-class goalie, definitely. Calm... good with the ball, and on top of that, he makes incredible saves. We are more than happy to have him."

Klopp insists his side will not get carried away and "celebrate like kids" over a first trip to Wembley in six years as there is business to be done in the Premier League.

They can look forward to a return to the stadium for a domestic cup final for the first time since they lost to Manchester City in the League Cup during Klopp's first season in 2016.

But while Thursday's result was a boost, Klopp insists Liverpool cannot allow their focus to be distracted from keeping the pressure on Manchester City, who have an 11-point cushion at the top of the table having played one match more.

Ahead of Sunday's trip to Crystal Palace, he said: "Last night we were flying. It gives us confidence because of everything which was said about us without the boys (Africa Cup of Nations absentees Mohamed Salah, Sadio Mane and Naby Keita) who are not available at the moment. 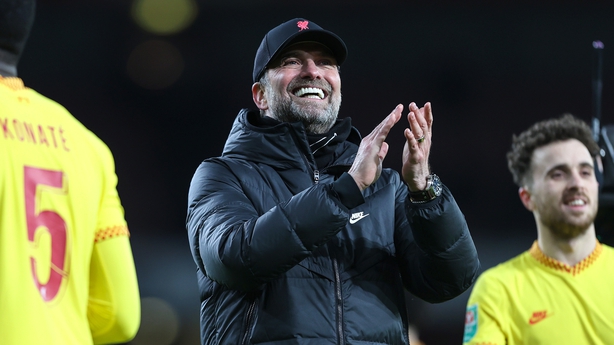 "We are not kids any more and will (not) be celebrating for the next four weeks, we just take the feeling and can hopefully use it.

"We feel good in this moment but we have to create a different mood until Sunday because Crystal Palace away - they don't make presents.

"We have to be in this fighting mood again and we will be. But we have to be greedy again, aggressive in a football way again and fight with all we have as Crystal Palace will ask for that.

"That is what I am concerned about, not so much how can we keep this feeling for the next four weeks until we play the final.

"We are really looking forward to it (the final) but the only problem is there are six or seven games to play before then.

"We have to put it aside a little bit but keep the feeling because it was good."

Klopp is hopeful Alex Oxlade-Chamberlain can be in contention on Sunday after missing the Arsenal match with an ankle problem.

The German added: "Ox, we hope and pray. He was running yesterday but we don't know what that exactly means for today.

"It would be helpful if he could train before the game. I don't know yet."

Liverpool will hold back Harvey Elliott until next month after his return to training this week following four months out with an ankle fracture dislocation.

On his return to the squad, the Reds boss said: "It's outstanding. I have a really nice office with a really good view on the pitches and when Harvey did his rehab sessions the last weeks, I could watch probably five of them, so I got already excited by watching them and then he came back.

"He was out for a long time so we cannot and will not and should not rush it, but he looked directly like he could play.

"We had to force ourselves a little bit to say, 'No, no, that makes no sense after that long period', but I'm pretty sure after the international break he should be ready." 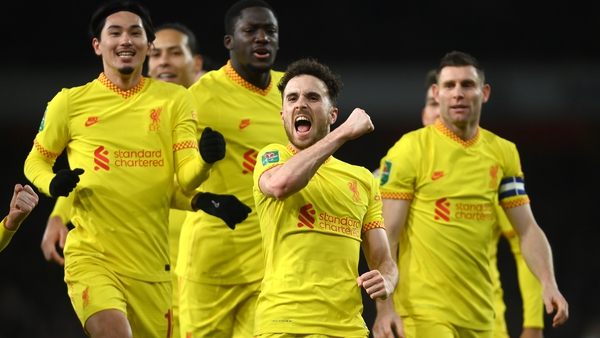