Kepa Arrizabalaga admits Chelsea are starting to look over their shoulder in the battle for Champions League qualification after their slump continued with a 1-1 draw at Brighton.

The third-placed Blues topped the Premier League table early last month but a dismal run of just two wins from nine top-flight outings since has left their title challenge in tatters.

Pressure is growing on manager Thomas Tuchel, with his side now 12 points adrift of leaders Manchester City, having also played a game more.

In addition, London rivals Tottenham and Arsenal could soon start to threaten Chelsea's position in the top four as they each have a number of games in hand following the raft of recent postponements.

Goalkeeper Kepa is aware of that threat and targeting a swift upturn in results, beginning with Sunday's Stamford Bridge clash with Spurs.

"We are honest. We are in good positions in all the competitions - we are in the Champions League, we have the League Cup final and the World Club Cup - but in the Premier League we have dropped points in the last month," the Spaniard told the club website.

"We have to get back to winning ways because everybody is coming (up behind us).

"We need points because we want to be on top of the league, but we have to look at ourselves, improve and step up.

"We have another big game on Sunday, a London derby, and from there we go."

Tuchel blamed a lacklustre display at the Amex Stadium on mental and physical tiredness during a tetchy post-match press conference.

The German has subsequently given his players two days off before preparations for the Tottenham game begin on Friday.

Spurs sit 11 points behind Chelsea but have played five fixtures fewer ahead of travelling to Leicester on Wednesday, while Arsenal are nine points below the Blues with three games in hand.

Hakim Ziyech's first-half goal against the run of play gave the European champions something to build on during Tuesday evening's trip to Sussex but impressive Brighton roared back to claim a deserved point courtesy of Adam Webster's bullet header from a corner.

Kepa, who has been in first-team action due to Edouard Mendy's participation in the Africa Cup of Nations with Senegal, says the team must work hard to resolve ongoing issues.

"We are not happy of course, we dropped two points and we didn't play well," said the 27-year-old.

"Of course there is disappointment and frustration. We only got a point because they scored from a set-piece.

We worked a lot, we ran a lot, but in small details we lost two points.

"Set-pieces are about concentration, about focus and taking your man. We have to look at ourselves, not outside, and improve. There is not one solution. We are working on it, trying to find solutions." 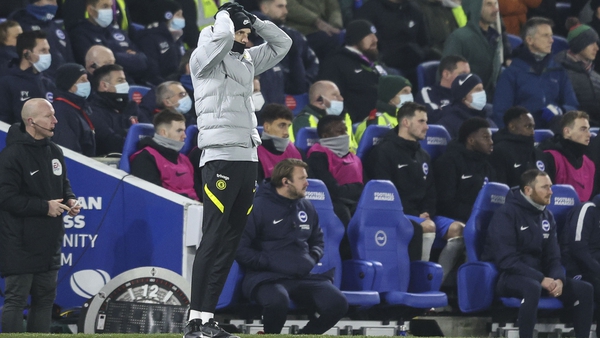