Liverpool manager Jurgen Klopp is determined to find a short-term solution to the absence of Mohamed Salah and Sadio Mane.

Despite playing against 10 men for 71 minutes, the goalless Carabao Cup semi-final first-leg draw with Arsenal represented the first time since April the Reds had failed to score at home.

That inevitably led the focus to fall on two forwards currently occupied at the Africa Cup of Nations who have provided 24 goals and 10 assists across 20 Premier League matches this season.

There is a possibility Salah could be back by this time next week if Egypt, who lost their opening game and sit bottom of their group, fail to make it through to the knockout stages.

Mane's stay with Senegal looks like being longer but regardless Klopp needs to come up with a way to compensate while they are gone and he knows results like the Arsenal one will only intensify the scrutiny.

"The only way to avoid these kind of questions is by scoring," said Klopp.

"Do we miss them? Yes. But we have had struggles even with Sadio and Mo against 10 men. It's about how can we do better with the team.

"It is not about who is not in, it is about how we can do better with the team who played last night.

"We were not good enough in moments. That's the situation, nothing to do with who is not here.

"It was crystal clear we would sit here today after drawing 0-0 against Arsenal and the only thing you have in your mind is Sadio and Mo are not here.

"That is not a solution, it is only part of the problem and we are here to find solutions. I am completely in the game to find these solutions.

"We have to get through different periods in a season, we always had to, and this is our period now so let's go through this together."

The absence of Salah and Mane robs Liverpool of pace up front but Klopp insists that is not the issue and they need to play smarter, not faster.

"A lot of top counter-pressing moments and winning the ball back are not about this final pace that they usually bring, this is needed in different situations," added Klopp ahead of Sunday's visit of Brentford.

"We have to play against deep formations in between the lines and quick thinking is more important than quick running.

"Yes, Mo and Sadio can think quick as well but they are not here."

Klopp has received a boost with the news striker Divock Origi is back in light training after five weeks out with a knee injury.

"It's likely we could see him soon. Yesterday he was outside running and looked really good. He will not be too far away," he said. 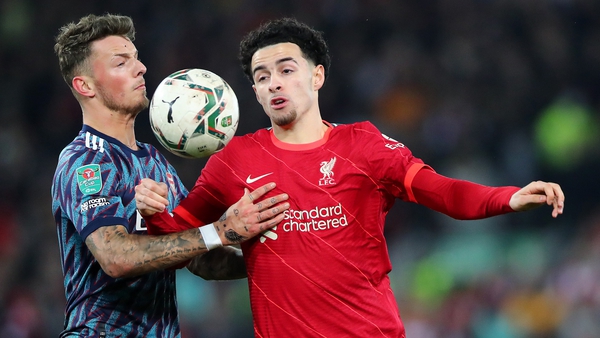