Roberto Lopes' Cape Verde were beaten in their second group game at the Africa Cup of Nations after Hassane Bande chested home the ball six minutes before half-time to give Burkina Faso victory.

Bande thrust his chest forward to steer in a cross from Isaa Kabore and secure a first Group A victory for his country, who lost their opening game to hosts Cameroon on Sunday.

Burkina Faso moved level with their opponents on three points in the standings, three behind Cameroon who thrashed Ethiopia 4-1 in the earlier Group A game at the Olembe Stadium.

Bande was brought into the line-up to replace Bertrand Traore, who tested positive for Covid-19 on the eve of the match.

The Aston Villa striker was one of four players forced into quarantine, although the Burkinabe did get their coach Kamou Malo back out of isolation after he had missed Sunday's opener.

Burkina showed more attacking intent in yet another 1-0 result, the 10th in 14 games at the tournament.

Cape Verde rarely threatened, even after bringing on Ryan Mendes as a second-half substitute in the first appearance for their star player, who had been injured and was not expected to feature.

Julio Tavares had their best chance but was denied by a good save from Burkina Faso goalkeeper Herve Koffi.

Cape Verde have also been hard hit by Covid-19 infections, with their coach Bubista yet to arrive at the tournament in Cameroon.

Earlier, hosts Cameroon overcame another hesitant start to crush Ethiopia 4-1 and advance to the next stage of the Africa Cup of Nations with their second successive Group A victory.

Captain Vincent Aboubakar and Karl Toko Ekambi both scored twice as Cameroon turned in a strong second-half performance and advanced to six points after also winning their opening game against Burkina Faso.

But the triumph over Ethiopia at the Olembe Stadium was much more convincing and will come as a morale boost as they carry a major burden of expectation.

Ethiopia made a shock start as they caught Cameroon's defence napping, with Amanuel Aregawi delivering a square ball into the area and Dawa Dukele getting in front of his marker to slot home the pass.

It was the second time Cameroon trailed in the tournament, but they needed only four minutes to equalise.

Collins Fai, who had proven slovenly in defence when Ethiopia scored their goal, made amends with a quality cross and Toko Ekambi took advantage of poor marking to head home in the eighth minute.

The French-born striker rattled the woodwork with a header but Ethiopia were also dangerous on the counter-attack, catching out Cameroon repeatedly with their pace even if they did not have much possession.

But they wilted soon after the start of the second half as Aboubakar scored twice in as many minutes.

He headed home Collins’s cross in the 53rd minute and slid home a similar square ball from Nicolas Moumi Ngamaleu.

Toko Ekambi scored his second, and Cameroon’s fourth, in the 67th minute.

Covid restrictions meant the newly built Olembe Stadium was around 20% full for the match. 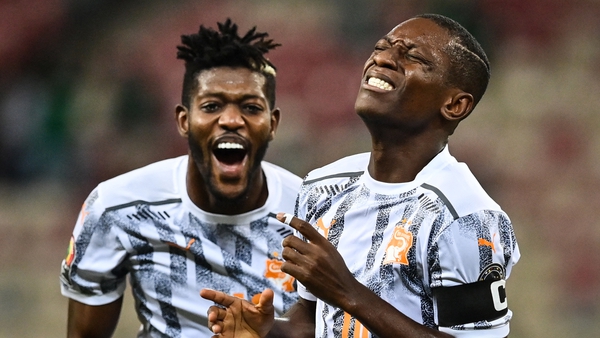