Swansea City have completed the signing of Republic of Ireland defender Cyrus Christie on loan from Fulham for the remainder of the Championship season.

Christie has won 29 caps for Ireland, scoring two goals, and was part of the squad for the Euro 2016 finals in France.

He started his career in the youth ranks at Coventry City and went on to make over 100 league appearances for the Sky Blues - while also having loan spells at Nuneaton Town and Hinckley Borough - before making a move to Derby in 2014.

Christie was a regular over his three years with the Rams, helping them reach the play-offs in 2016 and making 119 appearances in all competitions.

A transfer to relegated Middlesbrough followed in 2017, and he subsequently joined Fulham in January of 2018.

During his time with the Cottagers he has twice featured as a substitute in Championship play-off finals; coming off the bench in victories over Aston Villa and Brentford in 2018 and 2020 respectively.

Christie spent last season on loan at Nottingham Forest, and made 44 appearances in all competitions.

He'll now link up with another Ireland international, Michael Obafemi, who joined the Swans from Southampton last August. Ryan Manning is also a regular for the Welsh outfit.

The 30-year-old New Zealand striker has signed for an undisclosed fee, understood to be in excess of £20m (€24m), on a two-and-a-half year-contract and could make his debut in Saturday's showdown with fellow strugglers Watford at St James' Park.

Newcastle head coach Eddie Howe told the club website: "Chris is an important signing for us at a crucial time and I'm very pleased we have been able to move quickly and bring him here.

"He is a very dangerous attacking threat, has a physicality and character that I really like, and he has vast experience in the Premier League. He will be a great fit for us."

Wood, who has played for Leicester and Leeds among other clubs, moves to Newcastle after four and a half years at Burnley, during which time he scored 49 goals in 144 Premier League appearances.

"This is a very exciting opportunity for me and I'm delighted to be a Newcastle United player," Wood said.

"I have played at St James' Park a few times and it's an amazing place, so to have the chance to represent this club with those incredible supporters behind me and my team-mates is very special.

"The club and manager have been first class during this process, and I really can't wait to get onto the pitch and repay the faith they have in me, especially with a vital part of the season ahead of us." 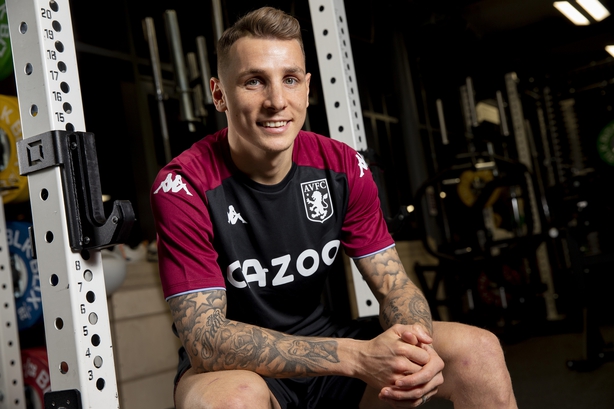 Aston Villa have completed the signing of left-back Lucas Digne from Everton.

Financial details were not disclosed but Sky Sports had earlier reported that the deal was worth between £20m and £25m (€30m).

The 28-year-old joins Villa after three and a half years at Everton, where he made 127 appearances across all competitions while registering six goals and 20 assists.

Digne, capped 43 times by France, last played for the Merseyside club on 1 December in the 4-1 home defeat by rivals Liverpool.

Villa head coach Steven Gerrard said on the club's website: "When Lucas became available we jumped at the opportunity to bring him to the club.

"To sign a player of his pedigree and quality in the January window is a great addition to our squad and his arrival excites me and everyone associated with Aston Villa."