Republic of Ireland Under-21 international Evan Ferguson set up Brighton's equaliser as they fought back to beat West Brom and reach the FA Cup fourth round after extra time at the Hawthorns.

Neal Maupay's 98th-minute winner secured a 2-1 come-from-behind victory for the Premier League side over the 10-man Baggies, with 17-year-old former Bohemians forward Ferguson at the heart of the fight-back after coming on as a substitute.

The Championship promotion-chasers went ahead through a 47th-minute finish from Ireland forward Callum Robinson before being reduced to 10 men with just over 20 minutes of normal time to go when Cedric Kipre picked up two bookings in quick succession.

The visitors capitalised as substitute Jakub Moder equalised in the 81st minute from Ferguson's assist, then the scorer teed up Maupay eight minutes into the first half of extra time.

Ireland defender Shane Duffy, who made a substitute appearance against the Toffees, was in possession of the captain's armband and started in the back three, while others coming into the side included debutant goalkeeper Kjell Scherpen and 19-year-old defender Odel Offiah, the nephew of rugby league's Martin Offiah, while boss Valerien Ismael named a West Brom side showing four alterations.

The home side made a bright start to the contest, which included Matt Phillips curling over, before Brighton began to threaten, with Baggies goalkeeper David Button doing well to deny Danny Welbeck in the 19th minute and Solly March seeing a drive deflect wide off Kipre two minutes later. 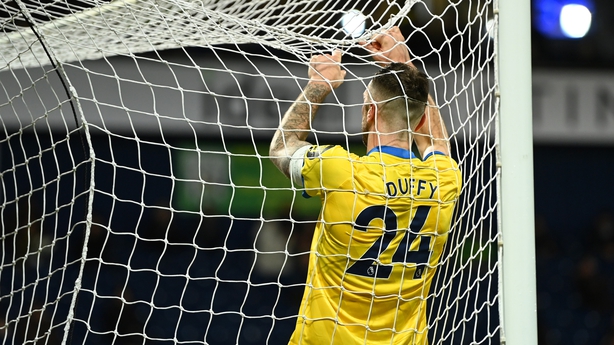 Potter was then forced into a change as Enock Mwepu limped off and was replaced by Alexis Mac Allister.

After West Brom captain Jake Livermore unleashed a strike that went into the stand via a deflection off Duffy, Brighton had a couple of chances just prior to the break, both falling to Maupay, the Frenchman sending a looping header narrowly wide before having a shot kept out by another good Button save.

West Brom then grabbed the lead moments after the restart when Karlan Grant burst forward, laid the ball to Robinson and the Ireland international struck past Scherpen.

Dan Burn fired an attempt on the home goal into the stand shortly afterwards, before West Brom were suddenly a man down, with Kipre being booked in the 67th and 69th minutes following fouls on Maupay and substitute Leandro Trossard - a third sending off for Ismael's men in two games.

Within seconds, Duffy missed a chance to equalise, lifting the ball over right in front of goal - and Brighton then did draw level as two players who had come on five minutes earlier combined, Ferguson providing the assist and Moder firing in.

Continued Brighton pressure saw Ferguson lift an effort onto the roof of the net, penalty appeals rejected by referee Robert Jones when a Moder shot hit Conor Townsend, and Button produce another impressive stop as he pushed Mac Allister's strike around a post.

West Brom hung on to force extra time, before having their resistance broken again early in the additional period when Moder crossed from the right and Trossard allowed the ball to run to Maupay, who beat Button with a low shot.

Ferguson thought he had added a third for the hosts shortly afterwards but saw his finish ruled out for offside.