Bundesliga leaders Bayern Munich slumped to a shock 2-1 home defeat to lowly Borussia Monchengladbach - for whom Republic of Ireland Under-21 international Conor Noss was an unused substitute - at a snowy Allianz Arena.

Robert Lewandowski fired Bayern ahead after 18 minutes by turning away smartly from Nico Elvedi and smashing a vicious shot inside Yann Sommer's near post.

Lewandowski's 20th league goal of the season saw Bayern equal their own Bundesliga record of scoring in 65 consecutive matches.

But Monchengladbach, who had thrashed Bayern 5-0 in the German Cup in October but failed to win any of their previous five games, turned the contest on its head with two goals in four minutes. 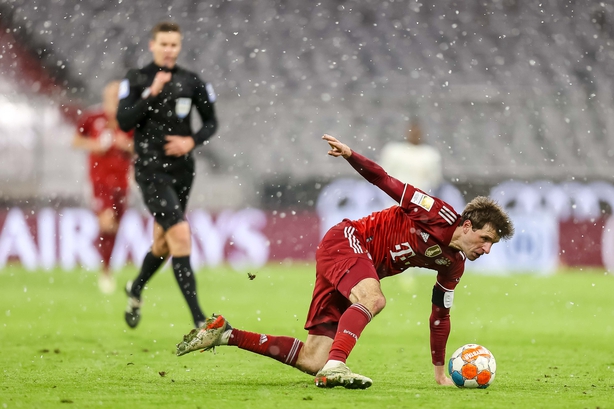 Florian Neuhaus volleyed home following some sloppy defending from the returning Joshua Kimmich, back after missing two months out with a lung issue after contracting coronavirus.

Stefan Lainer was left unmarked after 31 minutes to put Monchengladbach ahead with a firm header that Bayern goalkeeper Sven Ulreich got a hand to.

Lewandowski struck the woodwork either side of the interval and Thomas Muller saw his effort cleared off the goal line by Matthias Ginter.

Monchengladbach, who started the second half of the season just two points above the relegation play-off place, almost increased their lead through Alassane Plea in the closing stages.

And the visitors held on to inflict Bayern's third league defeat of the season and keep the gap to them and second-placed Borussia Dortmund to nine points.

Marseille moved into second spot in Ligue 1 with a 1-0 victory at Bordeaux.

Cengiz Under scored a wonderful winner after 37 minutes, his fifth league goal of the season.