Liverpool defender Virgil Van Dijk extolled goalkeeper Caoimhin Kelleher after their 2-2 draw away to Chelsea, saying that the Irish goalkeeper was badly needed in light of the club's Covid-19 issues.

The Republic of Ireland goalkeeper was elevated to the starting line-up following the disclosure that first-choice Alisson Becker was laid low with Covid-19 on Friday - comfortably the biggest Premier League game that the Cork man has started.

Kelleher again thrived in a high pressure environment, making two fine stops from Christian Pulisic in either half, performing his duties well throughout.

Liverpool led 2-0 before the half-hour mark through goals from Sadio Mane - lucky not to have been sent off following an elbow on Cesar Azpilicueta in the opening seconds of the match - and Mohamed Salah.

But two goals shortly before half-time, the first stunning volley from Mateo Kovacic and the second a cool finish from Pulisic levelled the game and the scoreline remained unchanged despite a high-octane second half.

Liverpool's much-vaunted centre-half Virgil Van Dijk acknowledged that Kelleher could do little with the home side's goals and praised the 23-year-old's composure and presence.

"Yeah, definitely you know - I'm quite a big fan of him. He's a fantastic goalkeeper, he's learning from the best with Alisson.

"His presence is good; his confidence is good - and he's good on the ball. He's making good saves as well - so we need him right now because of the covid cases.

"The first goal he couldn't do anything about it, and we need him for the next games as a well."

With Allison remaining in isolation for a time, Kelleher is almost sure to start Liverpool's upcoming Cup games, against Shrewsbury Town in the FA Cup and Arsenal in the EFL Cup semi-final. 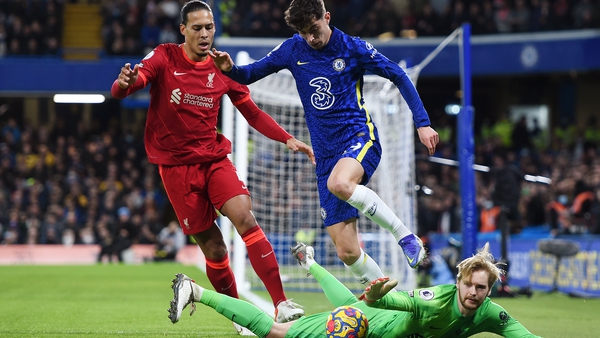 Chelsea battle back to draw with Liverpool