The Belgian is among eight players who have been sidelined after testing positive during the Covid-19 outbreak at Stamford Bridge.

But striker Lukaku and winger Callum Hudson-Odoi are at the stage where they can return to training if they can provide a negative test - as is full-back Ben Chilwell, although he is still out injured.

"If I understood it correctly, we need a negative test and we have negative tests for Romelu, Callum and Ben Chilwell," said Tuchel. "Although Ben Chilwell will not be involved against Aston Villa.

"The other two will be on the (training) pitch if they are again negative. Then, we need to see, they have been ill and have symptoms, but we will see.

"It is a Premier League game at one of the toughest places where you can play in Aston Villa.

"It is good news, don't get me wrong, but I am not over-excited now because I know I need to check how they are."

Chelsea were angry that their match at Wolves last weekend, which they drew 0-0, was not postponed like six other Premier League fixtures were.

But they returned to winning ways on Wednesday night by beating Brentford 2-0 to reach the semi-finals of the Carabao Cup.

Tuchel was forced to hand debuts to teenage academy prospects Harvey Vale, Jude Soonsup-Bell and Xavier Simons, and all acquitted themselves well.

Kante and James combined to set up Pontus Jansson's own goal 10 minutes from time and Pulisic won the penalty which Jorginho converted to wrap up the tie and secure a last-four meeting with Tottenham.

All five should be back in the starting line-up at Villa Park. 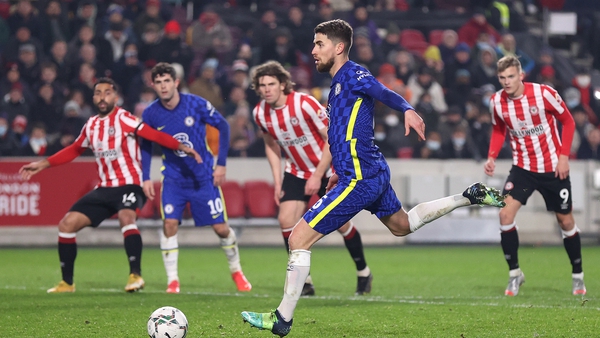