Liverpool boss Jurgen Klopp said Tottenham Hotspur striker Harry Kane could have broken Andy Robertson's leg with a first-half tackle that should have resulted in a red card in a feisty 2-2 draw in the Premier League on Sunday.

Shortly after giving Tottenham the lead with his first league goal for two months, Kane launched into a lunging tackle on Robertson that had Klopp fuming on the touchline.

The England skipper was only shown a yellow card - one of eight dished out by referee Paul Tierney in an enthralling duel - and Klopp's mood was hardly improved when Tierney failed to award his side a penalty for a shove on Diogo Jota who had cancelled out Kane's opener with a header.

Klopp was also yellow-carded for his rant at the fourth official, sarcastically bowing as he went into the book.

The German did not have any complaints about Robertson's 77th-minute red card for an ugly tackle on Spurs defender Emerson Royal, following a VAR check, but was mystified by Kane not getting one earlier.

"The result was fine but would have been different with the right decisions," Klopp told reporters.

"Robertson's red card proved the VAR was working because I thought maybe they were not in their office. Luckily Robertson's leg was in the air, it was pure coincidence. Harry cannot judge it. If Robbo's leg is on the ground it is a broken leg."

On the penalty claim, Klopp said: "It is incredible. [The referee] had the best spot on the pitch and doesn't give it. You will have to ask him what his problem is with me." 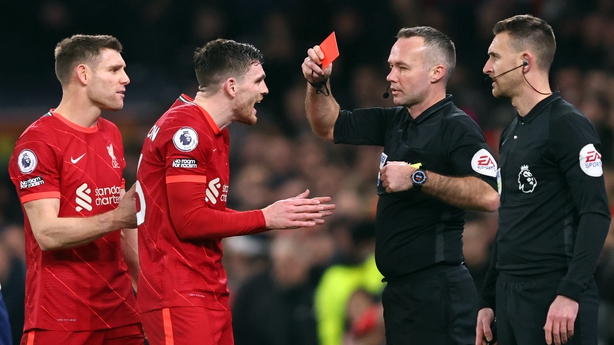 Liverpool were without Thiago Alcantara, who was isolating after a Covid-19 test, while Virgil van Dijk, Fabinho and Curtis Jones were also still unavailable for Covid-related reasons while Jordan Henderson was missing with a cold.

It left Liverpool vulnerable to Tottenham's counter-attacking style, although goals by Jota and Robertson looked to have clinched a ninth successive win in all competitions.

"We have our complete midfield out, the best centre-half in the world... we lose our captain on matchday so you cannot expect to play the best football game of the season.

"You have to fight and that's what the boys did. The first half was a good game from my team.

"The second half not exactly as good because we felt the intensity of the last few weeks and the opponent looked like they had finished warming up. They looked fresher."

On his own yellow card, Klopp said: "I was a bit more emotional in the game. He comes over and gives me a yellow card but I'd have preferred the right decisions on the pitch."

Weakened Liverpool play Leicester City in the League Cup on Wednesday, Leeds United on St Stephen's Day and then Leicester in the league on 28 December - a schedule Klopp says is "impossible".

"We do not have the players. We could maybe have another [Covid-19] case or two. We have to think about it, we cannot just push it all through. We would prefer to play but we need some help. If we carry on we cannot carry on as usual." 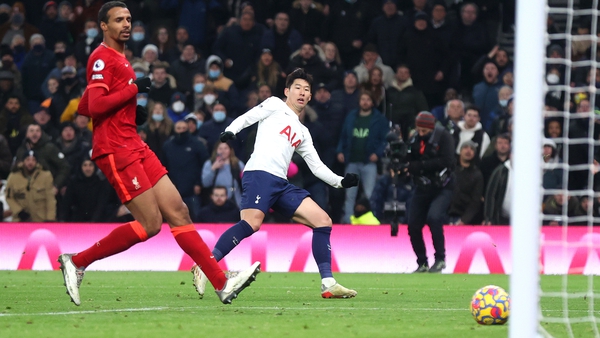 Tottenham and Liverpool share the spoils in festive treat