Arsenal manager Mikel Arteta is not yet ready to bring back former captain Pierre-Emerick Aubameyang into the team.

Aubameyang has been stripped of the armband and left out of the last two Premier League games, the club having taken stern action after the Gabon forward reportedly returned late from a trip abroad to visit his ill mother.

Alexandre Lacazette captained the side as the Gunners beat West Ham on Wednesday night to move back up into the top four.

Arteta confirmed Aubameyang would also not be considered for Saturday's trip to Leeds as speculation continues over whether the 32-year-old has played his last game for the club.

"For this game, he is not available for selection," the Arsenal boss said.

Asked what Aubameyang needed to do to get back into contention, Arteta added: "He is not available for the Leeds game, and this is the situation right now."

Arteta admitted it was a difficult experience having to take action against Aubameyang, but that it was just another test of his managerial position.

"I am sitting here to try to make the right decisions every day. My only intention is to get the club in the best possible condition, to defend our players, and to get the best performance and results on the pitch as we can.

"It is very challenging because those decisions are tough, and are not pleasant, but you have to do what you feel is right."

Arteta confirmed there were still some concerns over Covid issues, with several fixtures this weekend having already been postponed.

"We are waiting for more tests which we will have this afternoon - and this is the only thing we can do: wait and see," the Arsenal manager said.

"We had a couple of issues at the weekend, but we will train today and see how everyone is feeling."

Arteta added: "This (Covid situation) is changing every day and we all have that uncertainty. Hopefully we don't have any cases, but we will have to wait and see."

Arsenal will be seeking a third successive league win when they head to Elland Road.

"The last two performances have been really good in terms of what we want to achieve in matches, the results we have got and the way we have dominated those games," Arteta said.

"But we need to be consistent in that over 10 months to achieve the goals that we want, which is to be the best and we are not there yet."

Midfielder Martin Odegaard has impressed in recent week - not, though, that comes as a surprise to Arteta.

"He is a natural leader. If you look for the perfect professional, he wouldn't be very far from that," the Arsenal boss said.

"He is very, very young, but he has already had a lot of experience in different clubs, in international football.

"I agree that in the last few weeks he is getting very close to his best level.

"The ceiling for him, I don't know where it is with the talent that he has, the desire that he has, how much he wants to always improve and get better. We have got a tremendous player there."

Former Gunners captain Arteta took over as manager in late 2019, and has seen the club go through a lot during those two years.

The Spaniard, though, is not giving any consideration yet to whether his current contract will be extended.

"No, we haven't discussed anything like that. I think we have many other priorities at the moment that are far more important than that," Arteta said.

"I'm just trying to get the best out of the team, trying to cope with all the situations that we are facing at the moment. Things will happen naturally." 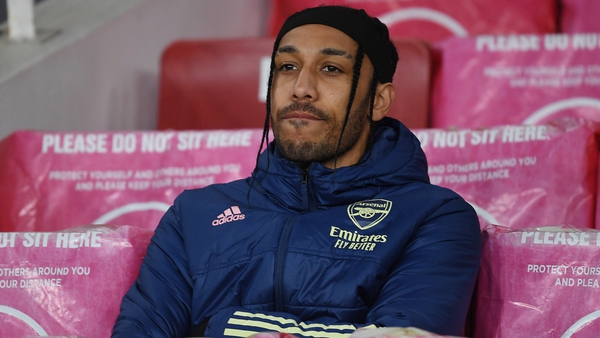 Arteta refuses to say if Aubameyang is finished at Arsenal