Aston Villa manager Steven Gerrard admits he possibly could have been more ambitious on his return to Anfield but says he did not want to go "gung ho" and be on the end of a thrashing.

The match was decided by Mohamed Salah's 67th-minute penalty – his 21st goal of the season – after he was brought down by Tyrone Mings but Villa created plenty of problems in the last 15 minutes when Gerrard sent on Danny Ings and Emiliano Buendia.

He said: "We tried to get the balance right and I thought we did a good job of trying to contain Liverpool; you can try to be too gung ho and get hit for a scoreline which doesn’t help.

"The plan was to try to take it to the latter stages and then throw more players on from the side and get more of our attacking players on the pitch.

"We’ll analyse and I’ll look at myself and whether I should have done it earlier. We didn’t want to get gung ho."

While his side ceded the majority of the possession and were out-shot 20 to four, Gerrard felt the match hinged on two decisions – one for Salah’s spot-kick and the other not given for a foul by Alisson on Ings.

"I thought we had a decent shout for one, there was certainly contact from Alisson on Danny Ings and if you follow it there is a two-hand shove on Ollie Watkins," he said.

"We thought that deserved the referee and VAR taking another look but it looked like they wanted to move on quickly.

"Ultimately we have lost the game in the other box, which we felt was a foul on Tyrone, it feels harsh but penalty box to penalty box Liverpool were better than us.

"I thought we were were defensively sound for the majority of the game and to lose it to a penalty was hard but you could see Liverpool were a level above."

In the build-up Gerrard had tried to play down the emotion of his return to his boyhood club but admits it was an emotional experience for everyone connected with him with the crowd singing his name early in the game and after the final whistle.

"I understand there will be emotion around it for me and my family. I tried to focus on Aston Villa and make sure that was the priority.

"I was very respectful and thankful for the reception I got, which was only natural because of the years of my life I gave to this is club."

The Reds boss felt they fully deserved the win which kept them one point behind leaders Manchester City and one ahead of Chelsea in the three-way title race.

"We were the better team for 75 minutes and opened up the game in the last 15 minutes and there was some situations which were tricky," he said.

Asked what was said between him and Gerrard, who left the club in 2015 four months before the German’s arrival but was brought back as an under-18 coach two years later, Klopp added: "He said 'Congratulations’ and I said ‘Thank you’.

"Nothing will come between him and me but in the end we are focused. You can be best friends with someone and want to beat them.

"It is the same with me and David Wagner (Klopp’s best friend who managed Huddersfield against him in the Premier League).

"There is one person it was not easy for and that is Stevie. They fought really hard for a result." 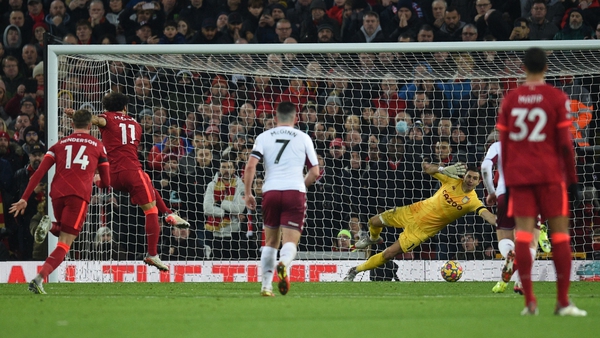