Liverpool manager Jurgen Klopp said it was a matter of time before former player Steven Gerrard would take charge of the Merseyside club, ahead of his return to Anfield as Aston Villa's head coach.

Liverpool great Gerrard, who replaced Dean Smith at Villa last month, won numerous trophies in 17 years at Anfield and will take on his boyhood club for the first time as a manager on Saturday.

When asked on Friday if the former Liverpool captain would manage the Anfield club one day, Klopp told reporters: "I think it will definitely happen and that is good for everybody.

"The only thing is when is the right moment for that. We saw that with Frank (Lampard) with his time at Chelsea... Stevie is doing really well at the moment. He's very young still, from a manager's point of view.

"It's not easy for a world class player to become an outstanding manager but it's possible, and it looks like Stevie has all the skills you need. I'm really happy for him."

Liverpool head into Saturday's game in second place in the Premier League, a point behind leaders Manchester City.

Klopp said he was looking forward to Gerrard's visit with Villa, who have won three of their four games since his appointment to move up to 10th.

"It has been a proper start (for Gerrard at Villa), but none of his four games were against us," Klopp said.

"We love Steven but that doesn't mean anything around this game. We are all professionals as we will go with all we have.

"I celebrated at (former club) Mainz (as Borussia Dortmund manager) like a crazy devil. Stevie is allowed to do that tomorrow. Let's just hope he has no reason to do so."

Klopp added striker Divock Origi is available to face Villa but defender Nat Phillips will be sidelined for up to five weeks with a broken cheekbone.

Diogo Jota, who has scored eight league goals, has not trained since picking up a knock against Wolverhampton Wanderers last weekend and Klopp said they would take a late call on the Portuguese forward. 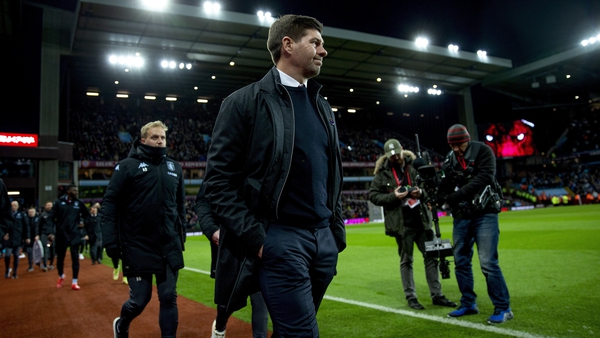 Gerrard only focused on taking three points from Anfield