Chelsea missed the chance to seal qualification for the Women's Champions League quarter-finals with a game to spare as they drew 0-0 with Juventus at Kingsmeadow.

Emma Hayes' side were thwarted on a number of occasions by Juve goalkeeper Pauline Peyraud-Magnin as they endured a frustrating time of it in their penultimate Group A match, where victory would have guaranteed their progress as pool winners.

With their fate still to be determined, last season's runners-up Chelsea - who completed a 2020-21 domestic treble by winning the FA Cup on Sunday - complete their group fixtures by playing Wolfsburg away next Thursday.

They have 11 points from five matches, three more than Juventus - managed by former Arsenal boss Joe Montemurro - and Wolsfburg, who earlier on Wednesday were 3-0 victors over a Servette outfit still without one on the board.

In the night's most surreal moment Chelsea striker Sam Kerr picked up a bizarre booking after she stopped a pitch invader in his tracks with a strong shoulder. In the aftermath, the referee gave her a yellow card. 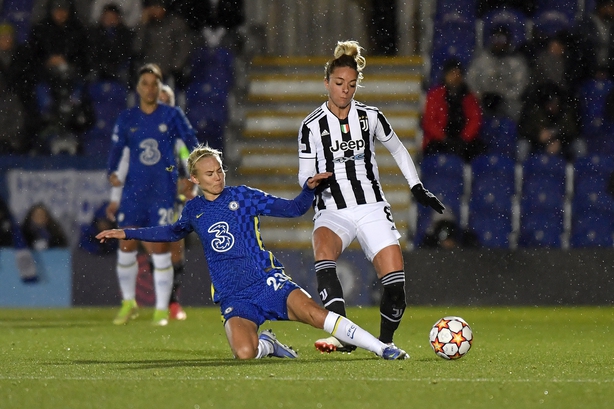 Peyraud-Magnin was in action in the second minute of the contest as she pushed an Erin Cuthbert strike onto the top of the crossbar.

The visitors' bar was hit again in the 21st minute via Kerr's delivery from the right, and Peyraud-Magnin then denied Guro Reiten, turning her drive over.

Chelsea continued to apply pressure, with Kerr putting the ball across the face of goal from a tight angle having gone around Peyraud-Magnin, then heading off-target, before the France international pulled off another save as she tipped Millie Bright's effort over.

After Pernille Harder struck too high early in the second half, Kerr slotted in from close-range from Fran Kirby's cross - but the effort was disallowed for offside.

Peyraud-Magnin's opposite number Ann Katrin-Berger then made a comfortable save as she gathered Lina Hurtig's shot.

Beth England was brought on by Hayes and saw an effort blocked by Peyraud-Magnin in the 80th minute.

Kirby and Bright then made further unsuccessful attempts as the hosts' bid to break the deadlock proved in vain.