Olympique Lyonnais have been docked one point after their Ligue 1 home game against Olympique de Marseille was abandoned amid crowd trouble last month.

The game, which will be replayed behind closed doors, was called off after Marseille's Dimitri Payet was hit by a bottle thrown from the stands of Lyon's Groupama Stadium.

Lyon, whose president Jean-Michel Aulas criticised the referee's decision to end the 21 November game, remain 12th in the standings, now with 22 points from 16 matches.

Ligue 1 has been marred by fan violence this season.

Nice were docked two points, one of them suspended, after serious incidents during their game in August against Marseille, when visiting players clashed with home fans who pelted them with missiles and stormed on to the pitch.

The northern derby between RC Lens and Lille was hit by crowd problems in September, with the start of the second half delayed after rival fans threw objects at each other before people ran on to the pitch, prompting riot police and stewards to intervene.

There has also been crowd trouble in Montpellier, Angers, Marseille and St Etienne. 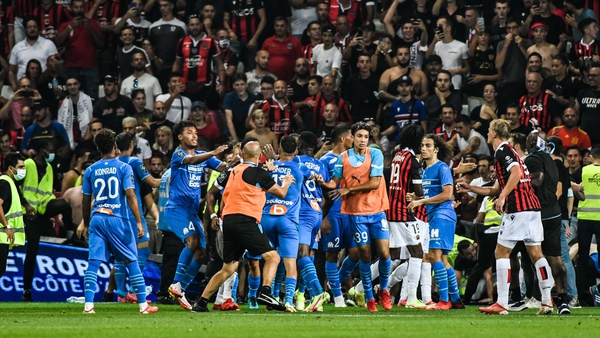