Liverpool came from behind to knock AC Milan out of Europe with a 2-1 victory at San Siro, as goals from Mohamed Salah and Divock Origi helped a second-string Reds side finish the Champions League group stage with a perfect record.

Milan needed to win to stand any chance of progressing to the last 16 and went in front through England defender Fikayo Tomori in the first half, to the delight of the home support.

But Salah soon equalised with his 20th goal of the season in all competitions and Origi, who came on to score a stoppage-time winner against Wolverhampton Wanderers in the Premier League on Saturday, headed home Liverpool's second after the break.

Salah, Alisson Becker and Sadio Mane were the big name players that started, with the likes of Virgil Van Dijk, Jordan Henderson and Thiago Alcantara not even travelling to Italy which meant Klopp named five academy players on the bench – with another, Tyler Morton, making a second successive start in Europe.

Despite that Milan – needing to win and Porto and Atletico Madrid to draw to reach the last 16 – appeared reluctant to test their opponents early on and Liverpool, with only their perfect group record to play for, did most of the attacking but with a lack of intensity.

Milan’s first corner in the 28th minute saw them take the lead as Takumi Minamino made a mess of the in-swinging cross, forcing Alisson to hurriedly parry, and Tomori poked home from close range.

Origi, given a rare start, forced the first save from Maignan but the Milan goalkeeper could not hold on when Oxlade-Chamberlain unleashed one and Salah made the half-volley finish look much easier.

The club records of the first player to score in five group games in one season and also the most goals (seven) in the same phase are mere footnotes for Salah.

Origi, however, is a man carving out his own slice of Liverpool history and a looping 55th-minute header from Mane’s parried shot after he had robbed Tomori only added to his cult status.

With the return of former Liverpool captain Steven Gerrard to Anfield with his Aston Villa side on Saturday, Salah and Mane were rested for the final 26 minutes as Naby Keita and Joe Gomez, after more than a month each out of action, were given minutes.

The confidence which is coursing through this side was embodied by fifth-choice centre-back Nat Phillips.

In his first start of the season, after just 45 minutes against Preston and a late substitute appearance versus Atletico Madrid last month, his drag-back in his own penalty area sent two Milan players racing past and allowed him to launch a counter-attack.

Even when Milan did break through Alisson saved from Franck Kessie, underlining Liverpool’s strength at both ends of the pitch, and opponents will be watching Monday’s draw anxiously hoping to avoid the six-time champions. 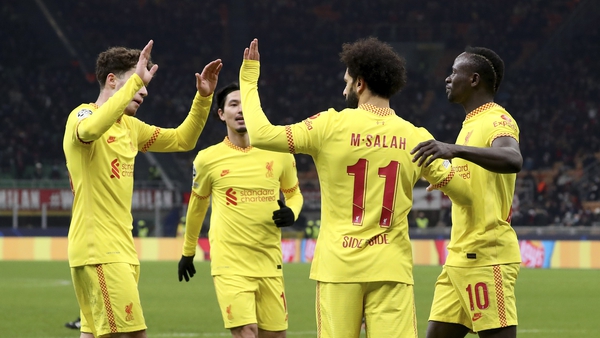