Hakim Ziyech struck the winner as Chelsea stayed top of the Premier League with a hard-fought 2-1 win at Watford, in a game that was temporarily halted after a medical emergency in the stands.

A Watford fan suffered a cardiac arrest in the Graham Taylor Stand 12 minutes into the match at Vicarage Road and referee David Coote took both sets of players off the pitch.

Medical staff from both teams raced across the pitch to assist the supporter, who was stabilised and then carried out on a stretcher to be taken to hospital.

When the match resumed it was Chelsea who took the lead, with Mason Mount stroking the ball past Daniel Bachmann in the 30th minute.

However, the visitors' advantage did not last long and Emmanuel Dennis, who had been a doubt for the fixture, struck the ball into the bottom corner.

In the second half, substitute Ziyech fired past Bachmann from a Mount pass to secure all three points for Chelsea.

Watford started like they did during Ole Gunnar Solskjaer’s final outing as Manchester United manager when the Hornets secured a 4-1 win, looking to get on the front foot at every opportunity.

In only his second Premier League start, Joao Pedro had a shot blocked by Trevoh Chalobah inside the opening three minutes following a cut back from Tom Cleverley.

Adam Masina was down receiving treatment when the fan required treatment. Fellow supporters got the attention of the players who then alerted the medical staff.

The players were off the pitch for around 25 minutes, before returning to the field for a five-minute warm-up and the match resumed with the clock set at 12 minutes.

After the restart, Mount gave the visitors the lead in the 30th minute.

Marcos Alonso ran down the left and found Kai Havertz in the box and instead of going for goal himself, the Germany international played in his unmarked team-mate who made no mistake to score his fourth goal of the season.

Chelsea thought they had scored a second moments later when Havertz put the ball in the net, but it was flagged for offside, with VAR upholding the decision.

Just before half-time, Moussa Sissoko won the ball back in midfield to start a counter, before feeding in Dennis.

The Hornets forward then got the better of Antonio Rudiger and fired past Edouard Mendy into the bottom corner via a deflection.

Watford had a chance to take the lead when Cleverley was played in behind the defender, but Mendy was quick to get off his line and managed to deny the midfielder outside of the penalty area.

But Chelsea secured the win in the 72nd minute as Mount turned provider, setting up an unmarked Ziyech, who beat Bachmann. 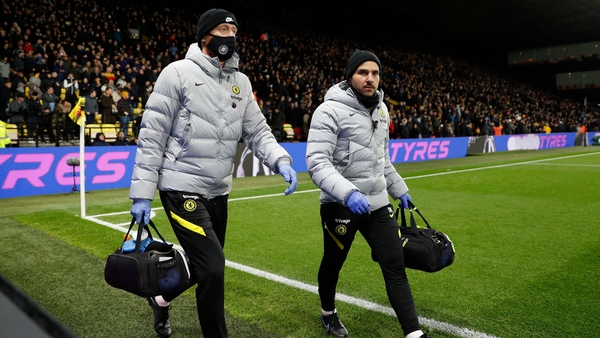 Games at Watford and Soutnhampton delayed after fans fall ill