Liverpool piled more pressure on former manager Rafael Benitez with a record-breaking 4-1 win over Everton at Goodison Park in the 239th Merseyside derby.

In maintaining their current Premier League average of three goals per game, Jurgen Klopp's side became the first top-flight English team to score at least twice in 18 successive fixtures in all competitions.

Mohamed Salah's figures continue to be equally impressive as his double, after Jordan Henderson's opener, made it 19 goals in as many appearances.

His first was a beautifully-crafted curling shot across Jordan Pickford into the far corner but his second was all about a predatory instinct.

With the score at 2-1 after Demarai Gray pulled one back just before half-time, he seized on a calamitous error by Everton captain Seamus Coleman to race the length of the pitch to score.

Diogo Jota lashing a shot past Pickford's near post was the last thing Benitez - now eight matches without a win and just two points from a possible 24 - wanted to see.

For some fans it was the last thing they did see as they began to stream for the exits.

The game was played on the 62nd anniversary of Bill Shankly's appointment as Liverpool manager and the early part of the second half in particular was something of a throwback as Everton put up a brief fight which had been lacking in the majority of their previous seven matches.

But that aside, the amount of space Liverpool were given in midfield in a Merseyside derby was barely believable.

Everton's players were so far off the pace the visitors were able to play through them at will with Henderson running the show in the first 20 minutes.

Joel Matip's header and two efforts from Salah, one denied by a smart low save from Pickford, could have put Klopp's side ahead before Henderson actually did in the ninth minute.

A ball over the top to Sadio Mane had players looking for an offside flag but - in the meantime - the ball was moved on to Andy Robertson who cut back for Henderson, unsurprisingly unmarked inside the penalty area considering Everton's earlier failings, and he coolly passed the ball beyond Pickford with his weaker left foot.

Had it not been for their goalkeeper, Everton would have been buried before half-time as he also saved from Trent Alexander-Arnold and Mane but was powerless to deny the class of Salah.

Caught in possession midway in the opposition's half, Everton were left chasing shadows as Henderson's inch-perfect through-ball inside left-back Lucas Digne sent the Egypt international racing clear and he clinically beat Pickford with a curling left-footed shot placed into the far corner.

Fittingly considering the impact Salah has had, it was the 500th league goal scored in Klopp's 234th game.
The atmosphere was starting to turn inside Goodison and seeing Andros Townsend and Gray booked for diving did nothing to help the mood.

Alexander-Arnold slicing a Richarlison cross over his own crossbar appeared the closest Everton would come to troubling Liverpool's goal before, out of nothing, they gave themselves a lifeline.

Mane lost possession wide on the left and Richarlison quickly slotted the ball through to Gray, who charged down through the middle to fire in a shot which Alisson Becker could not keep out.

It was Everton's first goal in a month and one which saw Gray equal his joint-best Premier League scoring season, matching the four he got for Leicester in 2018-19.

The goal injected new life into the crowd and the players with even lumbering 32-year-old striker Salomon Rondon suddenly finding the energy to press the central defenders.

Mane's goal-bound header blocked by Ben Godfrey just before the break suggested the pain was not over for Everton.

Benitez's side came out galvanised for the second half and were making a contest of it until one error decided the game.

When Liverpool cleared a corner the ball was passed back by Gray to Coleman but the Toffees captain miscontrolled and the Egyptian brilliantly seized the opportunity, racing from halfway to roll a shot past Pickford.

Benitez - yet to beat his former side in seven attempts in domestic competition - tried his best to encourage and cajole renewed effort from his players but it was a hopeless task without his still-injured main striker Dominic Calvert-Lewin, and Jota made things worse in the 79th minute.

As Blues fans made a swift exit, the visiting Reds supporters entertained themselves with chants of "Rafa's at the wheel" - a cruel twist on the song they taunted Manchester United fans with after their 5-0 win at Old Trafford in October. 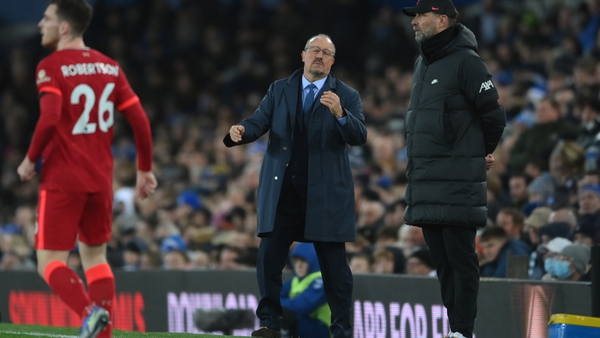 Benitez defiant as 'sack the board' chants ring out