Manchester United caretaker boss Michael Carrick will remain in charge for Thursday's Premier League against Arsenal, the club have confirmed.

United announced Ralf Rangnick as the new interim manager on Monday, but his work visa is yet to be finalised.

Following the departure of former boss Ole Gunnar Solskjaer, Carrick took charge of the Champions League win away to Villarreal as well as Sunday's 1-1 draw at Chelsea.

Rangnick joined United form from Lokomotiv Moscow, where he was manager of sports and development.

The German is set to take over from Carrick until the end of the season, when he will then move into a two-year consultancy role at Old Trafford.

A statement on United's website read: "Ralf Rangnick was announced as interim manager on Monday but, while the club follows the regulatory process around a work visa, Carrick will continue at the helm.

"Michael has communicated this to players and staff at Carrington in a busy week for the club."

Following the match with Arsenal, United host Crystal Palace on Sunday, by which time Rangnick could be in the dugout.

United are then scheduled to play their final Champions League group fixture against Swiss club Young Boys on 8 December, but that game could be switched to a neutral venue given the new travel restrictions in response to the emergence of the Omicron variant of coronavirus. 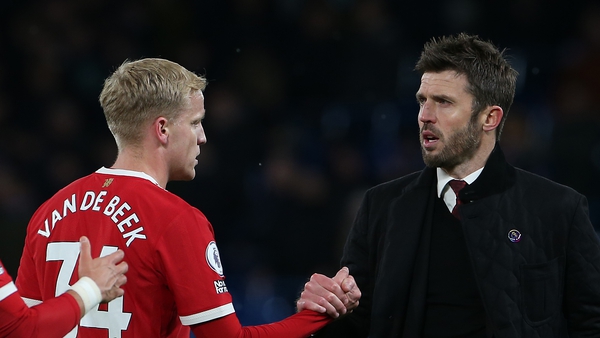