Jorginho held his nerve from the penalty spot to atone for gift-wrapping Jadon Sancho a goal and grab Chelsea a 1-1 Premier League draw with Manchester United.

Italy midfielder Jorginho failed to control Bruno Fernandes' up-and-under clearance, paying the price as the last man after a corner.

Sancho cantered through and slotted past a stranded Edouard Mendy to score his second goal of the week and stun the previously-comfortable Blues.

Jorginho quickly seized his chance for redemption, however, after Aaron Wan-Bissaka felled Thiago Silva in the box. 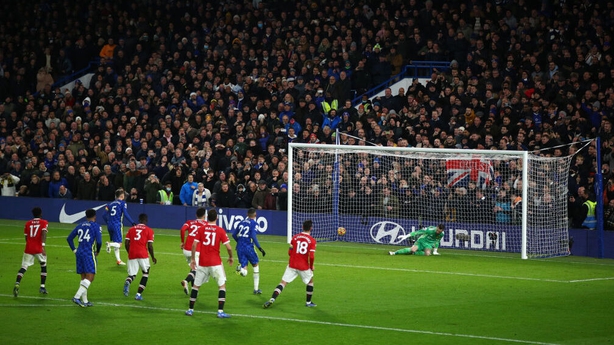 The 29-year-old side-footed home his 13th Premier League penalty and preserved Chelsea's outright lead at the top of the table.

Referee Anthony Taylor booked Thomas Tuchel amid a madcap finish, with the incensed Chelsea boss punished for overzealous protests and straying onto the pitch.

Caretaker boss Michael Carrick drew an industrious showing from United, acting as a boost ahead of Ralf Rangnick's expected arrival as interim manager.

United set up well without the ball early on, looking to shut off Jorginho's supply lines.

The Blues skipper managed to break free of that squeeze, but United certainly appeared a tighter unit.

Callum Hudson-Odoi put Hakim Ziyech in behind only for his shot to be deflected and lose power.

Marcos Alonso's header then had Hudson-Odoi threatening but the finish let him down. 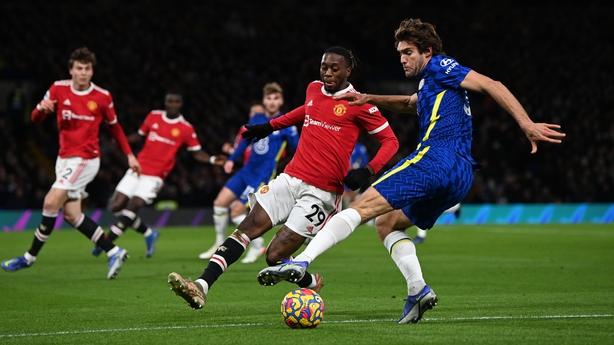 Left wing-back Alonso was wrong-footed by Wan-Bissaka failing to clear Reece James' hanging cross, allowing another opening to slip by.

Timo Werner could not reach Hudson-Odoi's high cross and then Antonio Rudiger thundered a 20-yard shot against the crossbar.

Silva's fine tackle launched another raid, but Werner could not generate enough space to avoid a block on his shot.

Fernandes was hugely fortunate to see Hudson-Odoi's drive deflected after a horrid errant pass across the face of goal.

At the end of the half James' whipped free-kick evaded everyone in the box, forcing David De Gea to palm around the post after the ball whipped up on the bounce.

One lapse of concentration after half-time was all it took for United to take the lead. 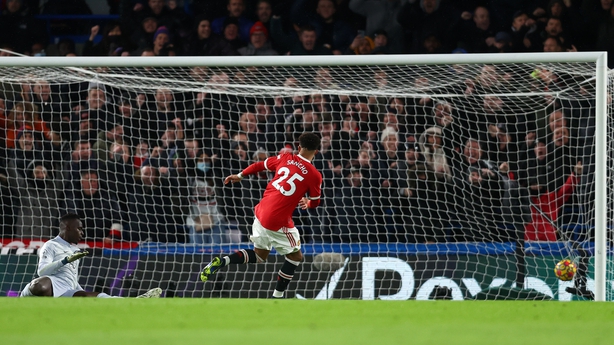 Jorginho failed to control Fernandes' hanging clearance as Chelsea's last man after a corner - and the loose ball fell perfectly for the onrushing Sancho.

The former Borussia Dortmund man coasted in on goal and slipped home, not even needing the lurking Marcus Rashford.

Chelsea upped the ante straight away in seeking an equaliser, but Ruben Loftus-Cheek could not pick out Werner on the break.

Werner then wasted a glorious chance, lashing wide under no pressure after Alonso's corner deflected off Wan-Bissaka's back. 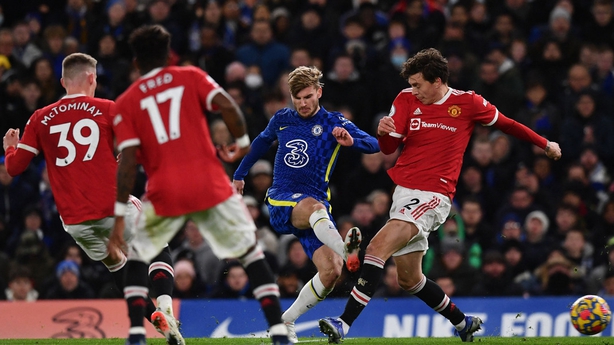 Chelsea's pressure finally told, however, as Wan-Bissaka clipped Silva in the box after another corner, with a penalty the only outcome.

The ice-cool Jorginho stepped up and buried the spot-kick, dragging Chelsea level and making up for his earlier error.

While Chelsea pressed for a win at the death, a stray pass from Mendy begged for a finish, only for Fred to chip the ball straight into the grateful Blues keeper's arms.

Rudiger could have pinched the win for Chelsea but instead volleyed over the bar when unmarked at the far post.