It's been a funny old year for St Patrick's Athletic defender Paddy Barrett.

The well-travelled 28-year-old had been disillusioned in Cambodia, where he was playing with C-League outfit Preah Khan Svay Rieng. Barrett was ready to come home, and a call from his old friend Stephen O'Donnell gave him the perfect chance to do that.

Barrett won two leagues and an FAI Cup with Dundalk and was part of the famous 2016 European run alongside then Lilywhites captain and current St Pat's head coach O'Donnell.

He jumped at the chance to come to Inchicore.

"It was strange circumstances surrounding me coming here over the start of the year but since I settled down I've been very happy," Barrett told RTÉ Sport ahead of Sunday's FAI Cup final against Bohs.

"I'm delighted with how my season has gone on the field and off the field. I'm really happy at this club. It's probably the most happy I've been in recent years. I knew Stephen more as a friend off the field than as a manager before I came here but he's made it so easy for me coming in.

"From Dundalk I went to over to America, to Cincinnati and Ohio. I just took a liking to the American life; chilled, the weather.

"I stayed over there for three years. With the pandemic and the Covid situation everything was up in a heap. I ended up, incredibly, in Cambodia. I didn't take a liking to that the way I'd have liked to because it's such a beautiful place.

"It's also got its 'you want to put the blindfold over your eyes moments' as well.

"Then I ended up in St Pat's in Inchicore - from Cambodia to Inchicore to the Aviva hopefully on Sunday to lift silverware!"

"Hopefully we can go and top it all off and make it an incredible year." 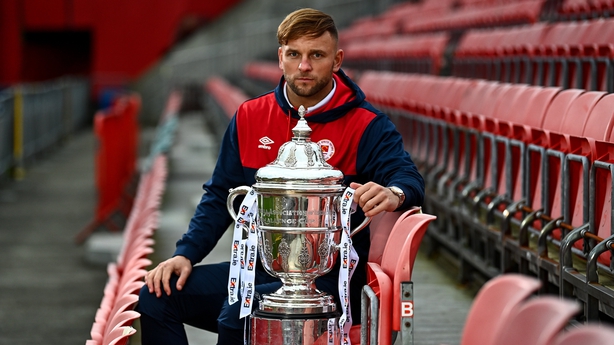 Barrett has experience of a few big days at the Aviva from his Dundalk days. The Saints got past his old club in the semi-final to make the decider - a result he says injected them with real belief they can now go all the way.

"I've been to the Aviva a few times with Dundalk in the FAI Cup and the Champions League qualifiers as well. It's a great place to play.

"Dundalk over the last few years have been the dominant force in League of Ireland football. It was a really tough game here against them, knowing they've got the experience over that last few years. I was holding the cup and looking back through recent winners; you just see 'Dundalk, Dundalk, Dundalk'. It's crazy. We were delighted to get through. Hopefully it's our chance this time.

"The gaffer is a legend up there. He won so much silverware at that club. There is a chance to win silverware this year... hopefully we can do that for him."

Expanding on O'Donnell's transition into coaching, Barrett painted a picture of demanding, driven taskmaster who wants to push Pat's on to really challenge Shamrock Rovers for a league crown.

"When he was on the field he was successful, he was demanding, he had levels. He'd get levels out of fellahs that probably didn't think they had levels. He demands high expectations and he gets it. He's an unbelievable manager to play under.

"In-house we want to go and challenge for a league title. We want to progress [what we did this year] over the next few years and hopefully we can get up to Rovers' level."