Carrick has been placed in caretaker charge after Saturday's 4-1 defeat at Watford proved the final straw for the beleaguered Solskjaer, who bid his farewells to the players with an address at the training ground on Sunday morning.

"It has been an emotional time for everyone at the club," Carrick said. "I've been working with Ole now for three years and I've known him an awful lot longer. I know the person he is, the values he has, what he believes and how he treats people.

"To see Ole unfortunately lose his job yesterday was tough for me and tough for a lot of people at the club. You could tell by the emotion around the place yesterday what Ole meant to everyone.

"We understand and Ole understands it's a results business so as much as you build the right foundations and environment and you show people the way, you sometimes don't get what you deserve...

"On the flip side football is football and it's business as usual today in terms of preparing the team for tomorrow's game.

"It's a privilege for me to sit in this position and I understand the responsibilities that come with that. The focus now is on flipping our mindset very quickly and that's something this club has done very well historically."

Carrick said he was told on Sunday morning by United's executive vice-chairman Ed Woodward he would be put in temporary charge - with the club planning to appoint an interim manager until the end of the season before a long-term replacement is named.

Things could potentially move faster than that - Paris Saint-Germain boss Mauricio Pochettino is understood to be unsettled in the French capital and could be open to a mid-season move - but Carrick said those decisions were not for him.

"It's literally just over 24 hours since everything unfolded and the game is not much further away so that is all I've been thinking about," he said at the Monday lunchtime press conference.

"I've not looked past that. We've got a big game on the weekend (against Premier League leaders Chelsea) but we will address that when we need to. As long as the club want me I will give my best."

Solskjaer's exit signals a rapid unravelling of United's ambitions this season. The surprise return of Cristiano Ronaldo had a side that finished second in the league last season being backed to challenge for the title, but instead they sit eighth, 12 points off Chelsea.

Fortunes in Europe have been only marginally better - though United go into Tuesday's match top of Group F, they are level on points with Villarreal with Atalanta two further back, having needed dramatic late goals from Ronaldo to salvage home wins over both sides and a draw away to Atalanta.

Asked what had gone wrong this season, Carrick said: "We could talk through all sorts of things, but it's not the time to look back now. I know what I could done better. It's important everyone looks at themselves and they don't look elsewhere."

But, given how central Carrick was to Solskjaer's set-up - taking training sessions alongside Kieran McKenna and delivering key pre-match tactical talks - dramatic changes seem unlikely during the 40-year-old's time in charge, however long it might last.

"We will have to wait and see," he said. "Of course I've got my own personality to Ole but we're very similar and that's why we worked together for so long.

"I'm not giving too much away about what my plans are but I'm very clear in my own mind about how we want to play and I'm looking forward to seeing that on the pitch."

Captain Harry Maguire, appearing alongside Carrick at the press conference, said players needed to take responsibility for the results that had led to Solskjaer's exit.

"It's been a very hard time for the players given the amount of respect that we have for the boss and what he's done for a lot of us over the last two and a half years," Maguire said.

"Of course the players need to take responsibility for everything on the football field. We're the ones that cross that white line. We were in it together as a group - the management and players - and ultimately the manager has paid the price.

"We're all disappointed. We take huge responsibility. We haven't been good enough as individuals and as a collective. We spoke about that. Now we've got to look forward to get the club back to where is was.

"The last few months have been nowhere near good enough." 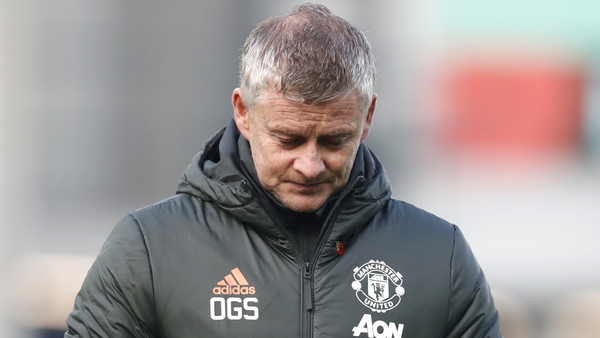 Solskjaer: I couldn't get the results we needed