Steven Gerrard admitted to feeling a mixture of pride and relief after two late goals got his managerial reign at Aston Villa off to a winning start.

Gerrard celebrated exuberantly when Ollie Watkins broke the deadlock after 84 minutes to put Villa in front against Brighton.

And the former Liverpool midfielder was jumping around his technical area again two minutes from time when Tyrone Mings lashed in another goal to seal a 2-0 victory.

It saw Gerrard become the first Villa manager to win his first Premier League game in charge since John Gregory in February 1998, and immediately put a four-point gap between Villa and the relegation places.

Gerrard, who left Rangers during the international break to replace Dean Smith at Villa Park, said: "I was feeling a combination of things. It was a mixture of excitement, relief and pride. I cannot be any more proud of the players. This was a big week, a big game for the team on the back of losing five.

"Some people were only around for a couple of days in the week. Everything we have asked them to do, in the main, they have followed instruction and delivered a really good performance in the end. I couldn't be more proud."

Gerrard prowled the touchline throughout the match, cajoling his players and offering guidance.

Asked about his management style, the 41-year-old said: "I want to be there on the side for my players. I want to coach from the side and I want them to see me and be visible. I want to help them, guide them, so they carry a game-plan out.

"Inside me is what was with me as a player, that will to win, that drive and energy.

"The buzz and highs as a player you certainly miss, and it's why you want to stay in the game.

"You are trying to control your emotions but you are kicking every ball. I love competing and I love winning. You should see me in staff games - five-aside or six-aside. I want to win.

"I love seeing my players smiling and feeling good about themselves.

"I want to, at times, show emotion. I will always be authentic. If anyone doubts me then just watch me after those goals today. That's real. That's feeling coming out. But you can't be like that all the time."

Despite the win, Villa's first after six successive defeats and their first at home since 18 September, Gerrard was not getting carried away.

"We were tense at times and it wasn't all perfect, but I thought we finished the game extremely strong," said the Villa boss.

"We have a lot of things to build on, the issues we had in the game, and look at the debrief, and from that we will grow, but we will be stronger."

Brighton had most of the ball and the better chances to score, before Watkins fired Villa in front.

Albion boss Graham Potter was frustrated to see his team take nothing from the game.

"I thought up until 83 minutes we did pretty much everything you can here apart from score in terms of controlling the crowd," said Potter.

"Then we left ourselves exposed a little bit and the turnover happens and we are 1-0 down. The last seven or eight minutes are disappointing." 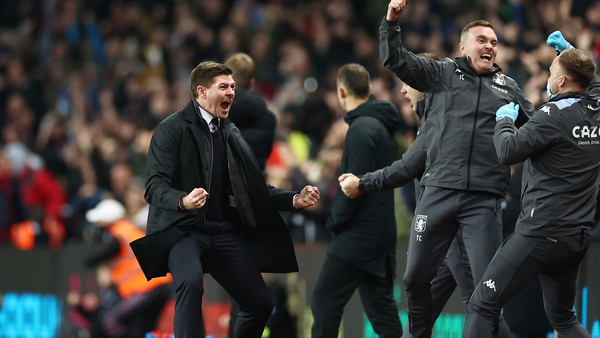