Waterford will need the promotion/relegation play-off to save their Premier Division status after they failed to beat St Pat's at the RSC.

The Blues came into the game level on points with Finn Harps, who had a better goal difference. This didn’t matter at the full-time whistle as they two teams played out a 0-0 draw while Harps were 5-0 winners over Longford Town.

While the home fans were left desolate at the end of the game, St Pat’s rejoiced with their small travelling fans, as they put on an exhibition ahead of next weekend’s FAI Cup final against Bohemians.

The Saints dominated this game with a pass and move game-plan from Stephen O’Donnell. His tactics involved the team holding the ball and passing it through a packed centre, which included defender Lee Demond.

That extra man in the middle allowed St Pat’s to be patient, and their plan nearly paid off inside five minutes when Robbie Benson hammered a header off the crossbar.

While Waterford’s defence held firm to resist St Pat’s, their attack struggled to find rhythm. They had to wait until the 15th minute for their first shot on goal, and this fell to Niall O’Keeffe who fired well over the intended target.

The Saints targeted Waterford's right flank for much of the first half. Benson and Jason McClelland excelled in in this area of the pitch with their close control of the ball and neat crosses. One in particular found Kyrian Nwoko but he fired over from six yards out.

Waterford nearly scored against the run of play in the closing minutes of the first half after a deflected shot fell into the path of Ronaldo Green. The midfielder, from a tight angle at the far post, hit it first time and the ball whizzed across the face goal.

St Pat’s began the second half with a flurry of chances. The first saw McClelland head the ball down to an unmarked Kryain Nwoko and his shot trickled wide.

The visitors won the kick-out from Brian Murphy and charged up the pitch. The ball was played to Jamie Lennon and he chipped it into the area for Chris Forrester. Just as he went to take a touch, he was swallowed by blue jerseys.

At this point in the game news of Finn Harps’ commanding lead over Longford was well known. This didn’t affect Phoenix Patterson’s evening, as he repeatedly ran at the St Pat’s backline. He was nearly rewarded for his performance with a stunning goal from outside the box, but Vitezslav Jaros dived lowed to save.

The Blues finished the strongest as they had two excellent chances with five minutes remaining. The first was from the boot of Jeremie Milambo, which was clawed out by Jaros. A corner was given, which fell to O’Keeffe and at point-blank range and he poked the ball towards goal but again Jaros was able to clear it away. 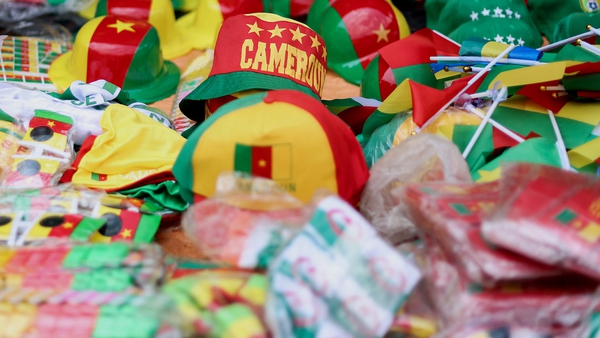 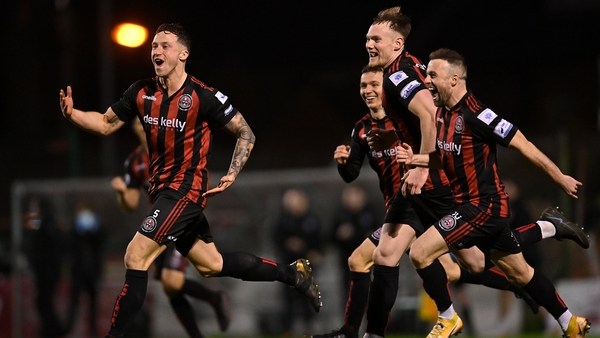 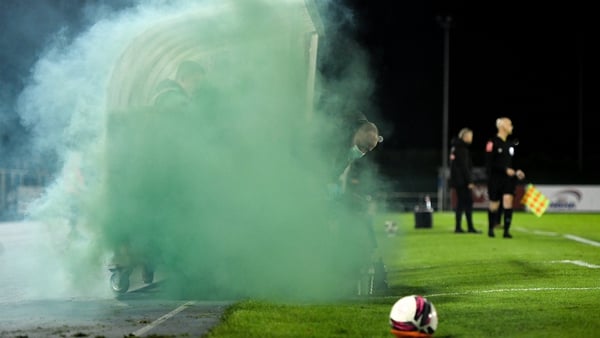 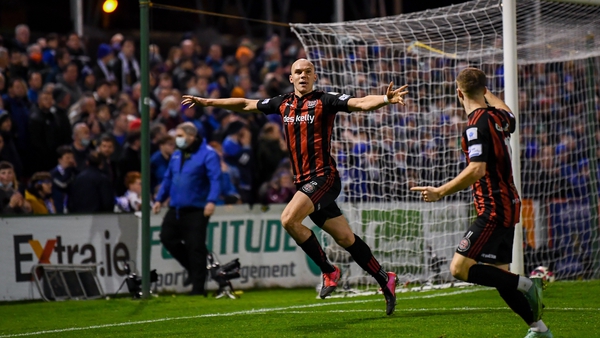