Gareth Southgate has promised England will not close their eyes to the controversies surrounding Qatar's hosting of the World Cup when they play there next year.

England formally confirmed their place at the tournament in 12 months with a 10-0 thrashing of San Marino in Serravalle on Monday.

Qatar has been heavily criticised by organisations such as Amnesty International over its human rights record in relation to the World Cup, particularly regarding the treatment of migrant workers.

Asked about the issues, manager Southgate said at his post-match press conference: "We have to go and work with people and represent the country in a foreign land and when you are doing that you have got to be 100% sure of your facts.

"That's not easy because it's hard to work through what is current and what is historic. We have a responsibility to represent our country in the right way.

"There are clear cultural differences between the two nations. It is hugely complex but we will take the time to educate ourselves and if we feel there are areas we can highlight and help, we have always tried to do that and we will do that."

England had all-but booked their place in Qatar but still needed to complete the job against winless minnows San Marino and Southgate was pleased with the ruthlessness shown.

He said: "We gave a performance that was enjoyable for the supporters that travelled, was clinical in the way we went about it, and then showed some exciting young players coming through.

"Of course we will have much tougher tests but I've been involved in nights like this with England that have been horrible, where the crowd were on our backs, where the whole environment was very different.

"It was nice to see young players going in and enjoying themselves and giving a good showing.

"I just like the fact we have got a mentality where we don't take our foot off the gas and whatever the challenge I have set the players they have responded to it."

Harry Kane's four goals in the first half took his overall England tally to 48, level with Gary Lineker, one behind Sir Bobby Charlton and closing in on Wayne Rooney's national record of 53.

Southgate believes the 28-year-old could go on to set a new benchmark that could last for many years.

He said: "I think that would definitely be one of his goals. The remarkable thing is we haven't given him the opportunities with nights like this too often.

"Certainly the other three games of this magnitude in this group we didn't give him the minutes.

"He understood that, of course. He has got huge personal ambitions as well as the team ones. He showed again the clinical nature and mentality he has got. There is no reason he can't. It's not 'Is he going to break the record?', it is when, and what might he do once he is beyond that point."

England's other goalscorers were Harry Maguire, Emile Smith Rowe, Tyrone Mings, Tammy Abraham and Bukayo Saka, while there was also an own goal. 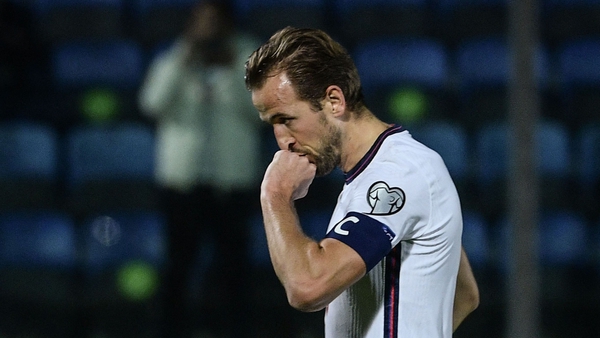