Stephen Kenny had his critics in place before he had even taken over as manager of the national side.

Mick McCarthy, an Irish footballing legend, was in charge, the team were responding and rebuilding following the end of the jaded Martin O'Neill era, and if the former Irish Captain Fantastic couldn’t get the job done, then what chance a League of Ireland man?

Kenny’s remarkable record with Dundalk, taking the Oriel Park club from the depths of despair to dominating the Premier Division for five years, while bringing unprecedented European success was acknowledged, and it was agreed – among the many – that the Under-21 job was a fine reward for such a League of Ireland man, and they wished him well.

And it must be said, even among those who fully supported Kenny getting the top job in Irish football, they suspected that the proposed handover of power would never materialise.

But Covid came, McCarthy moved on, and Kenny would finally take control, and despite the impressive play-off performance in Slovakia, there was little evidence from those opening three months that Kenny had swayed any of the non-believers that he was the man for the job.

Results were not being produced, the team appeared unable to score goals – one in their opening eight games – as the 2020 calendar came to a close, all the ammunition was there for the critics to take aim.

Former players lined up to suggest that Kenny was out of his depth, while it was reported that the manager did not have the full support of the FAI.

A few months respite before March would come around to signal the start of the World Cup qualifying campaign, then suddenly it looked like the manager’s luck was about to change, as the team bravely took the game to Serbia in Belgrade.

Aleksandar Mitrovic would have the final say that night, although the morale-boosting defeat suggested that things were starting to look up for the new man in charge.

But then came Luxembourg.

Kenny looked, and sounded like a dead man walking at the end of that demoralising and embarrassing home defeat to the lower-ranked team. If there was a time to sack the manager, that was it.

And perhaps if the FAI was in a healthier financial position, or under a different dynasty, Kenny may not have even lasted that long.

Yet something happened over the next couple of days, that by the time Kenny came back out to meet the press ahead of the away game with Qatar, he brought the fire, passionately outlining his belief in what he was attempting to do under very difficult circumstances.

Granted, a 1-1 draw with the World Cup hosts in Hungary was hardly earth-shattering, yet it bought Kenny just that right amount of time to see him through to the summer break where he could reset, recharge and attempt to kick-start his tenure.

Significantly, 11 games in without a victory, there was no unrest from within the camp, most notably in the playing department – there had been the departure of Alan Kelly and Damien Duff from the coaching ticket but that was another matter.

In fact, the players appeared to be buoyed by the challenge, were enjoying the high-level coaching sessions and spoke fondly of the management team, so it was no wonder that the 10-day end-of-season sojourn would prove such a success, and a real turning point in the team’s fortunes.

That first win came in Andorra, followed by the impressive scoreless draw against Hungary, who were getting ready for the Euros.

At the time, the manager was linking the two games to the three in September, and while it appeared odd considering there was a summer break and a full pre-season between windows, as it turned out, the team came flying into that first match back, the manager getting his just rewards for the planning and preparation, as his side delivered their best performance yet.

Yet still, the critics could point to the full-time result and lack of points on the board as Ronaldo broke Irish hearts in Faro, and were again building a case against Kenny three days later as Ireland wasted a string of early chances in the damning draw with Azerbaijan.

Eventually, the manager would get his first bit of luck in the home tie with Serbia, the eventual group winners, as Gavin Bazunu managed to keep the team in the contest until the death, when a fortuitous own goal secured the first decent competitive result.

Confidence grew in September and things started to take shape in October as first Azerbaijan were dispatched 3-0 in Baku before Qatar were swatted away at the Aviva.

The contrast and improvement in performances against those two sides, albeit weak international outfits, proved that Kenny’s side was continually improving, the manager was evidently much more in command of the role following a topsy turvy 12 months, and for the first time, the critics were quietened. 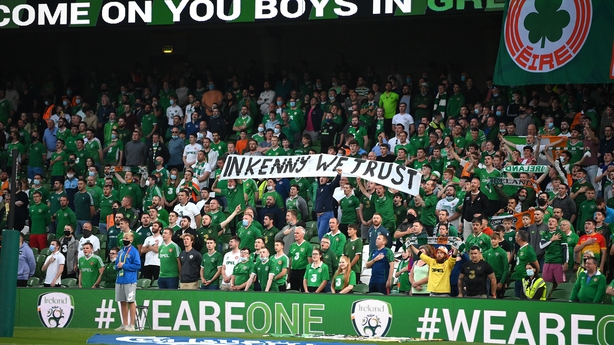 The full house for the Portugal match proved that the football community were behind the manager as they came in hope that the team could repeat the performance from the previous encounter.

They were not to be disappointed, likewise, the few thousand who travelled to Luxembourg as the campaign closed on a high with a second consecutive 3-0 away result.

The powers that be will now meet and review the manager’s performance, and appear to have no other option but to extend his contract following the team’s form since the summer.

If there are dissenters within the committee, as reported, they can still point to the results column and argue that two points from 12 against the top two is just not good enough.

But where else can they pull the manager up? What mistakes has he made over the course of the 15-month stretch?

That opening three-month period was a touch haphazard, but it was one carried out under a Covid cloud, where the manager also had to contend with an attempted sabotage following the motivational video debacle.

The performances were mixed, but there were signs and moments in every game, that the players were responding to the new tactics, and when they worked, they worked well, most notably in the Slovakia play-off and even for a spell at the start of that Wembley outing.

Kenny could not be faulted for the stirring performance away in Serbia, however, the team looked flat back in Dublin three days later and he must shoulder the responsibility for getting the selection wrong, while also being unable to rectify it during the 90 minutes.

The tactics in the second half against Azerbaijan at home were also disappointing, as the team opted to just hit ball after ball into the box in search of an equaliser, but recent performances suggest that the team have worked out quite quickly how to neutralise and defeat weaker sides.

Four months now until Ireland’s next games, and add another three for the next competitive fixture, the UEFA Nations League next June, and all appears to be very much under control with the national team who have scored 10 goals in the last four games, keeping four clean sheets in the process.

And looking ahead to 2022 as opposed to the same time last year, you would have to imagine that this winter will offer a lot more festive cheer for Stephen Kenny.

As for those with the decision to make regarding whether to extend the contract, and how long to extend it for, they may ponder the quite forceful words uttered by the reborn Shane Duffy following the Portugal game on Thursday.

"If you don't think we're going in a positive way, you're writing the wrong stuff," said Duffy, speaking to the assembled journalists.

"We're all going in the right direction. There's a difference in the football we're playing. Fans are excited about it.

"Every single one in there and the backroom staff as well, they're all amazing. If you went in that dressing room, everyone's happy and that's the way it is." 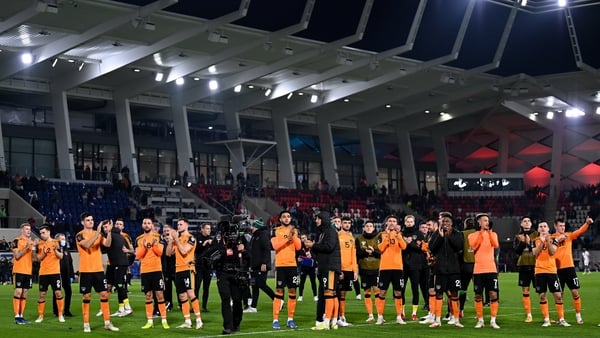 'More to come' - Kenny lauds players after away win