Ian Baraclough has told his Northern Ireland players they must relish the challenge of facing European champions Italy when the World Cup qualifying campaign comes to an end at Windsor Park on Monday night.

Northern Ireland's own hopes of reaching Qatar were dashed last month, but they will face an Italy side in need of a result after Jorginho’s late penalty miss in Friday's 1-1 draw with Switzerland left Roberto Mancini’s side still locked in a tussle with the Swiss for top spot in Group C.

That will only make life more difficult for Baraclough’s men – who ended a two-and-a-half-year wait for a competitive victory at Windsor Park by beating Lithuania 1-0 on Friday.

"I hope we can enjoy it," Baraclough said. "I hope the players can savour nights like that. It doesn’t happen every time. We’ve had some really big nights here with Germany and the Netherlands and the like.

"For us it’s massive: go and test yourselves against the European champions, the best team in Europe."

After a disappointing October, when defeat in Switzerland ended the World Cup dream before alarm bells rang as Northern Ireland surrendered a 1-0 lead to lose to Bulgaria, Baraclough got an encouraging response in the first half on Friday as his side dominated play and might have led 3-0 at the break.

And the manager hopes to see the same positive attitude on display on Monday, even if the level of opposition will make for a very different contest.

"There’s no fear," he added. "We know at times we’ll be pegged back in our own half, we won’t have much of the ball, so it’s key we look after it, learn from (Friday) and what was difficult in the second half for us and make sure we rectify that.

"We know what’s against us. I wish Jorginho had put that penalty away but that’s the test.

"We all want to beat the best and it’s something we’ve not been able to do for a while."

Baraclough named an experienced side to face Lithuania as Jonny Evans, Stuart Dallas and Ali McCann returned to the starting XI. There was also a place for Shane Ferguson, selected ahead of Newcastle’s Jamal Lewis, as Baraclough focused on players getting regular playing time at club level.

The manager hinted at changes for Monday night though they are unlikely to be sweeping. Baraclough will hope none are enforced, however, after Paddy McNair pulled up late on holding his hamstring, though the Middlesbrough man saw out the game.

"He said his groin was a little bit tight and then towards the end his hamstring tightened up," Baraclough said.

"I think it was more fatigue than a muscle injury so hopefully he’ll be OK when we get back, rest up, recuperate and get ready for Italy." 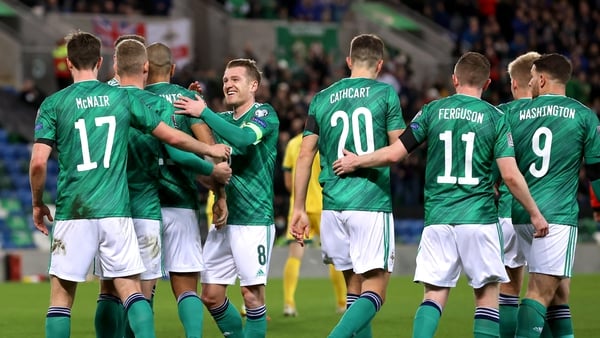