Shane Duffy has delivered a ringing endorsement of Republic of Ireland manager Stephen Kenny as his bosses prepare to sit down to discuss his future.

Kenny, who replaced Mick McCarthy at the helm in April last year, will be out of contract next summer, but it is understood the Football Association of Ireland will make a judgement on his reign to date when they assess a World Cup qualifying campaign which draws to a close in Luxembourg on Sunday.

Ireland will not be at next year's tournament in Qatar after a disastrous start to their Group A fixtures, but Thursday night's 0-0 draw with Portugal in Dublin cemented a belief within the camp that a new-look team is making significant progress.

The issue caused a clash between RTÉ Soccer pundits Richie Sadlier and Liam Brady during the coverage of the Portugal game.

Brighton defender Duffy, who won his 50th cap on the night, said: "I think Stephen's brilliant.

"He had a tough start with the whole Covid [situation] and players dropping out, and that resulted in results not going our way.

"But if you don't think we're going in a positive way, you're writing the wrong stuff. We're all going in the right direction. There's a difference in the football we're playing. Fans are excited about it.

"Every single one in there and the backroom staff as well, they're all amazing. If you went in that dressing room, everyone's happy and that's the way it is."

Such is the improvement Kenny's team has made - their heart-breaking defeat in Portugal in September is their only reverse in nine games - that the mood after a creditable draw at the Aviva Stadium in which Cristiano Ronaldo missed one gilt-edge chance and was denied at the death by teenage keeper Gavin Bazunu was one of disappointment rather than elation.

Asked about the atmosphere in the dressing room afterwards, Duffy, 29, said: "It wasn't ecstatic, the music wasn't blaring and that shows how far we have come."

Ireland already knew they could not qualify for the World Cup when they met up with Portugal and Serbia battling it out for top spot and automatic progression from the group.

But the point they added to their tally means they can finish third if they win in Luxembourg, who beat Azerbaijan 3-1 in Baku in their penultimate qualifier, on Sunday.

Duffy said: "That's the first thing the manager said after. We all know the disappointments at the start of the group, we didn't perform well enough but we want to finish the group as strong as we can. Going to Luxembourg to win is the aim and that's what we want to do.

"In the last four, five games, we have taken a step forward, the team has grown in confidence. Against one of the best teams in the world, we didn't fear them - that's a sign of the confidence in the way we are playing, and it's disappointing we didn't get the ball into the back of the net." 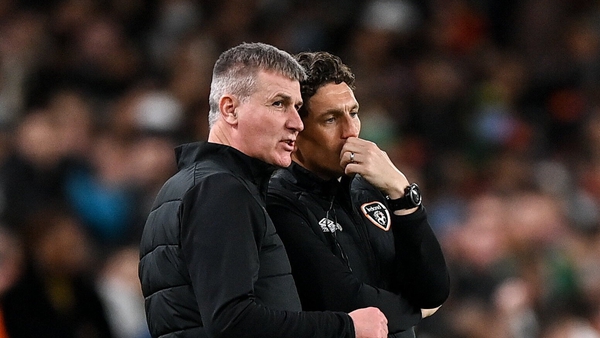