Jason Knight was back home in Derby, watching on the television, as Ireland almost defeated Portugal in Faro, but the emerging Irish midfielder believes that he has come back stronger following the freak training ground incident which caused him to miss the match.

Having broken into the team since Stephen Kenny took over as Ireland manager last year, the young Dubliner was beginning to establish himself as a focal point in the new-look midfield.

However, a training ground collision with club manager Wayne Rooney caused Knight to miss games at the start of the season, resulting in the 20-year-old being ruled out of Ireland's triple header in September.

Back in the Derby County starting XI and back in the Ireland squad, Knight is now ready to answer the call to take on Cristiano Ronaldo and a star-studded Portugal side on Thursday night in front of a full house at Lansdowne Road.

"I watched it at home, in Derby," said Knight, when asked about where he was watching the Algarve encounter.

"The lads performed really well; unfortunately we lost the game, but I think we took a lot of encouragement from that and took it into the next camp and got two very good results.

"I think we can take a lot of encouragement from that performance and hopefully get a good result against a very good team."

Knight is now looking to break back into the midfield for the World Cup qualifier, however, there is also a chance that the former Cabinteely youth will be asked to fill a wide role at some stage in the game.

And the versatile Derby County player is happy to play anywhere, if it involves getting a run out at the Aviva on Thursday night.

"I feel confident in myself to play whenever the gaffer asks me to step in.

"Look, it’s Portugal and will be a tough game, but everyone feels confident on the back of a good couple of camps and we’re in a good place going into the game.

"As long as I’m playing I’m happy. I have played a lot of positions too for Derby so I know [the wide role] quite well, and the gaffer here has seen me play it for Derby and feels comfortable putting me in there.

"It’s been really good to play a few positions and it’s a string to my bow. I feel comfortable on the ball wherever I play and hopefully I can just get some minutes."

Knight may have missed several games and a few potential Ireland caps as a result of what he described as a freak incident with Wayne Rooney, however, there are no hard feelings towards the manager, who has proved very influential in the development on the Ireland prospect.

And while Knight has spoken to Rooney about his former team-mate Ronaldo, he is well aware that Ireland are playing a very strong Portugal side and it is not just about keeping the Manchester United man quiet throughout.

"It was just a training ground. A slip from the gaffer in training. It was well documented in the past but it was just a freak accident and thankfully I’m back from it and playing a lot now and doing alright.

"He obviously didn’t mean it. It kept me out for a few weeks and it was something that I had to learn from, as I haven’t had too many injuries in my career so far. I have come past it and sort of feel stronger for it.

"The gaffer has been great for me personally on a one-to-one basis. He gives me little snippets of information that can help me develop my game and he has been great.

"We are going through a tough period but he has been great for me and my game and hopefully I can keep developing that and keep performing well for Derby and for Ireland.

"I have talked to the gaffer about his own career and [Ronaldo] has come up a couple of times in terms of how professional he is and how he lives his life. You watch him on the TV and you can see that he’s one of the best players that has played.

"It is hard to stop him, but Portugal have a lot of very good players and it’s not just against Ronaldo that you’re playing.

"You have to look and focus on other players and the whole team as a collective and that is what we’re going to try and do on Thursday night." 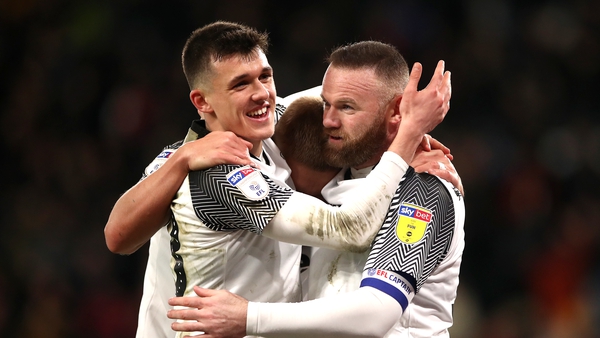