Leicester boss Brendan Rodgers remains confident his side can reach the Europa League knockout stage despite a frustrating 1-1 draw with Spartak Moscow.

They were forced to come from behind after Daniel Amartey cancelled out Victor Moses' shock opener.

Napoli’s 4-1 win at Legia Warsaw puts them in pole position but if Leicester win their last two games, at home to Legia in three weeks and in Naples in December, they will top the group.

Rodgers said: "It’s all to play for. If we, most importantly, win our next one that will put us in a good place going into the last game.

"It was always going to be the case, I’ve said about winning the two homes games, we haven’t done that, but it’s very clear – we win the two games and win the group.

"Napoli will be a tough game away from home but we played well here to be 2-0 up [before drawing 2-2] and we know if we play to our highest level we can win.

"I thought performance-wise we played reasonably well. We created chances, more than enough to win the game, and one moment where we lacked concentration and ability to run back cost us.

"Our reaction was good and we had other chances to win the game. To not win it is a little bit frustrating. Jamie has saved the team and the club so many times, it [the penalty miss] was unfortunate."

The Foxes dominated the first half without making a breakthrough and Boubakary Soumare came closest when he smacked the bar from 25 yards.

Limited Spartak were second best but they stunned the hosts by taking the lead after 51 minutes.

Moses started the move before running unchecked to meet Mikhail Ignatov’s right-wing cross and glance his first goal of the season past Kasper Schmeichel.

Leicester trailed for just seven minutes, though, and Amartey levelled when he headed in after Ayoze Perez flicked on Ryan Bertrand’s corner.

It should have been the catalyst for victory yet substitute Vardy wasted the chance from the spot with 15 minutes left.

He had only been on for five minutes when Moses hauled back Ademola Lookman in the area but his poor spot-kick was comfortably saved by Aleksandr Selikhov.

Kelechi Iheanacho then hit the post in the final 10 minutes, having blocked Kiernan Dewsbury-Hall’s header.

Spartak boss Rui Vitoria said: "It was a difficult game, we had a strong opposition, but it was very important for us to show a good defence and we are well organised.

"We knew we would not have many moments to score which is why we concentrated on defending well. We did not give them many opportunities to score.

"It was a hard-fought game and we have shown our strategy and our defence.

"It was very intense because our opponent is very intense and it is very natural for them, it is not easy to play such a dynamic team. We are trying to eventually achieve such intensity." 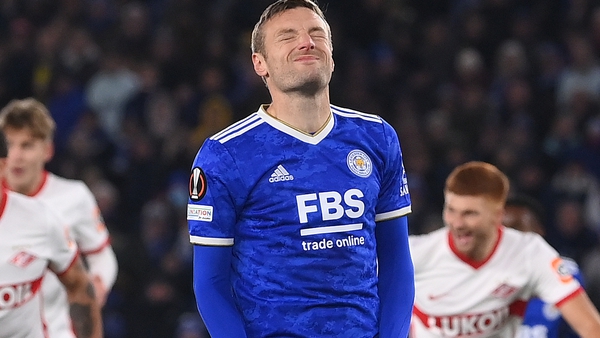