Pep Guardiola immediately turned his attention to Saturday's derby against Manchester United after his side brushed off Club Brugge for a second time.

Manchester City followed up their 5-1 win over the Belgian side a fortnight ago with a 4-1 victory at the Etihad Stadium to move to the top of Champions League Group A.

The result meant last season’s runners-up now need only a point to qualify for the last 16.

City manager Guardiola said: "The people were taking the p*** for me saying today was more important than United – and it was.

"But now the most important game ever is Man United."

Asked if he was concerned about the short turnaround prior to the game at 12.30pm on Saturday, Guardiola said: "No. If it was tomorrow we would play tomorrow.

"The schedule is the schedule, sometimes we play Tuesday, sometimes Friday. Sometimes it is 12.30 or sometimes 5.30. I am pretty sure at 12.30 on Saturday we will be at Old Trafford."

Guardiola raised some eyebrows in a post-match TV interview by saying City do not get "any help".

"When you are Manchester City you realise nobody helps you – no one," he told BT Sport.

"Everything we have done, we have to do it. That is why I am so satisfied. When you are in big clubs, after that, I understand. Maybe. Here no. If we win, we do it. I know it perfectly (because) all the titles I won before I did at big clubs."

Asked if that meant his City’s successes meant more, he said: "Absolutely. The pleasure is higher."

The Spaniard was asked if he could clarify his comments in his press conference but got frustrated as he tried to get his point across.

He said: "Listen don’t misunderstand me. What I’m saying is what we’ve done we did it, we deserved it. We did it for ourselves. That is so good and that is why I’m very pleased."

Asked what he felt he was not getting help with, he said: "We don’t have to be helped, absolutely not. We have to do it for ourselves."

Guardiola reflected positively on the game, which City won with goals in the second half from Riyad Mahrez, Raheem Sterling and Gabriel Jesus after a John Stones own goal had cancelled out Phil Foden's opener.

He said: "It was fully deserved. The second half was really good. They defended so deep and attacked the channels so it was not easy, but it was a good game and a good victory.

"It was important to take the six points against Brugge after our defeat in Paris. We need one more point to qualify, or three to be first, and we will try to do it." 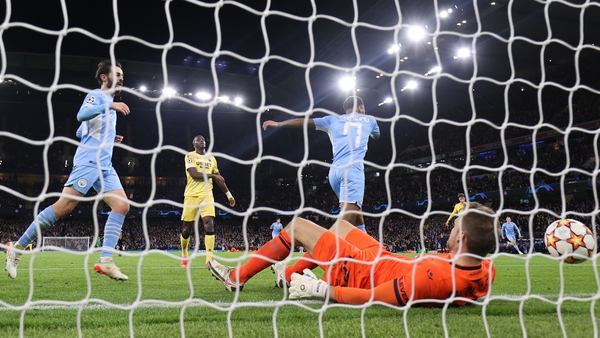 Sterling on the mark as Man City hammer Club Brugge