Ruben Dias is determined to "bounce back" from Manchester City's shock loss to Crystal Palace as next weekend's derby clash with Manchester United comes into focus.

Pep Guardiola's 200th Premier League match in charge was ruined by the Eagles on Saturday, when Wilfried Zaha became the first player to score a league goal at the Etihad Stadium this season.

That early strike was compounded by Aymeric Laporte's red card for hauling down the Palace forward late in the first half, before Gabriel Jesus saw an equaliser ruled out and Conor Gallagher completed a shock 2-0 victory.

"It is always a tough game in the Premier League," City centre-back Dias said.

"Home or away, whoever the opponent, and obviously we knew who we were playing against. Today we were not at our best.

"Even so, the team fought, the team gave everything and that was not enough today. When things don't go well, everything is missing.

"At the end, we might not have had all the chances we wanted to create but we definitely had chances and it is about scoring them. We lacked goals and we lacked not conceding.

"We just kept pushing and pushing, all of their team was inside their box, everyone was in there and we were trying but we didn't get to score, then the red card and obviously it was a very tough mission in the second half.

"The spirit of the team was strong and I think that is the biggest positive from today."

That character will be key as City look to immediately bounce back in their two fixtures before the international break.

Club Brugge should be worried about a reaction when they head to the Etihad Stadium for Wednesday's Champions League group game, before attention turns to Saturday's big match across town.

Manchester United secured a much-needed 3-0 win at Tottenham this weekend but Ole Gunnar Solskjaer will be desperate for victory after Liverpool hit five without reply when they last played at Old Trafford.

"Our reaction is that we have another game in three days and we are already thinking about it," Dias added.

"Today we obviously lost three points that were very important to us, but it is what it is, it is football.

While City look for a response, Palace want to build on their victory against Wolves before the international break.

Saturday was the Eagles' second league win of the season and comfortably the best performance since Patrick Vieira took charge in the summer, with Zaha shining as he led the hosts a merry dance in the first half.

"It was just about getting in their faces and not letting them play," he said.

"We know how good they are, but today was about us not letting them play, and showing them what we can do. That's what we did.

"I feel like we're a threat going forwards, but the difference you see now is that we keep the ball from the back. We keep the ball around the pitch and we make our chances.

"We're now exploiting the talent we have up front and all around the pitch." 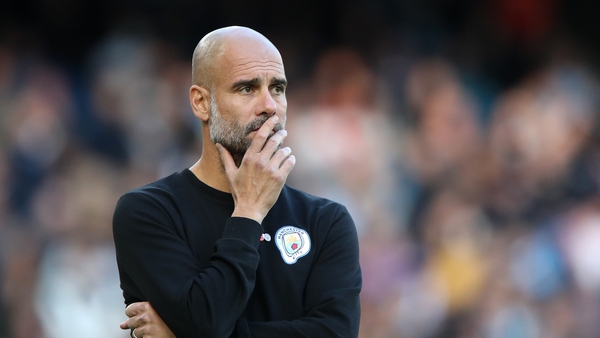