Graham Burke was sprung from the bench to score the only goal of the game at Bishopsgate to edge Shamrock Rovers ever closer to their 19th league title.

Victory moves Stephen Bradley's Hoops 16 points clear at the top of the Premier Division table with four games to play.

It means they can now seal the deal at home to Finn Harps at Tallaght Stadium on Friday, though they may not even have to wait until then.

Should second-placed St Patrick’s Athletic lose at home to Dundalk on Monday night, then Rovers’ back-to-back titles will be secured.

In the week after their relegation was rubber-stamped with defeat in Drogheda, the irony of their tussles with the champions won’t have been lost on Longford.

The midlanders, promoted in the play-offs having finished fourth in the First Division last year, have given Rovers four of their toughest games this season.

The Dubliner needed winners in the 93rd, 96th and 95th minutes in their three earlier meetings of the campaign before needing to dig in for victory here. 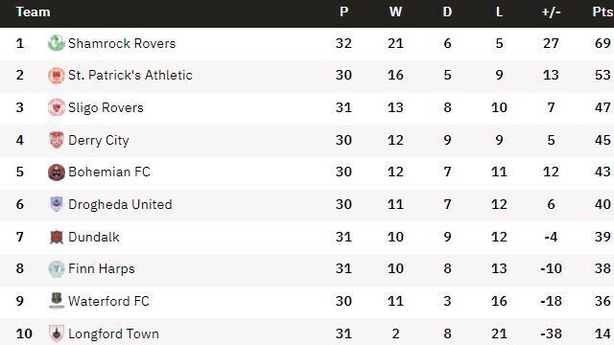 With five changes, several enforced, from Monday's derby draw with Bohemians, Rovers went with a very attacking line up, with Aidomo Emakhu starting alongside Rory Gaffney and Aaron Greene, and winger Neil Farrugia making his first start since returning from injury.

Played in trying conditions of driving rain, chances were slow in coming, despite Rovers owning the ball.

There were 17 minutes on the watch before Gaffney got the first real sniff of the home goal, his drive from a tight angle blocked out by Shane Elworthy for a third Hoops corner.

Longford might have made more of a promising set-piece situation minutes later; Dylan Grimes rifling it straight into the Rovers defensive wall.

An injury to captain Ronan Finn forced a rejig for Rovers 23 minutes in with Lee Grace coming in on the left of their defence while Sean Gannon pushed on to rightwing back.

Two minutes later they were inches from taking the lead out of nothing.

Richie Towell laid the ball off to Chris McCann, whose speculative shot from some 35 yards took a deflection off Aaron O’Driscoll to wrong foot keeper Lee Steacy but trickle just wide of a post for another corner.

Despite being on the back foot for much of the first half, it was Longford who should have been ahead from a glorious chance on 36 minutes.

Rob Manley tenaciously held off Lee Grace in a marauding run in behind. Alan Mannus parried his shot, and a follow-up from Aodh Dervin, before the latter headed over the bar from Aaron McNally’s cross.

Another chance fell the home side’s way in first-half stoppage time, Aaron Robinson drilling a shot into the side netting after Grimes’ free kick fell to him at the back post.

Rovers continued to dominate possession into the second half but didn’t finally spark until a triple substitution on 62 minutes when Dylan Watts, Danny Mandroiu and Burke were introduced.

Graham Burke has made an immediate impact at Bishopsgate!

Burke was only on the pitch a matter of moments before he swept the ball home after Lee Steacy denied Danny Mandroiu.@LongfordTownFC 0-1 @ShamrockRovers

Three minutes later, they were ahead, Burke beginning and finishing the move.

The Hoops number 10 sent Gaffney clear on the right to cross for Mandroiu. And though his close-range shot was brilliantly parried by Lee Steacy, Burke followed up to shoot to the net.

Longford refused to lie down and might have been level following a succession of corners on 76 minutes.

Substitute Aaron Dobbs looked set to score as he met Grimes delivery only to plant his header over the top.