Georgie Kelly has his sights set on "a big day out" with Bohemians and their supporters after coming up with the late goal which fired the club into a first Extra.ie FAI Cup final since 2008.

The striker found the net in the 89th minute against Waterford FC in their 1-0 semi-final win on an eventful Friday night for him at Dalymount Park, having earned and missed a penalty in the first-half.

But despite that setback he was able to make the difference against the nine men of Waterford.

"I don't know how to put it into words, it was a mad game," Kelly told RTÉ Sport at full-time.

"Just look at the scenes here after it, unbelievable. It wasn't pretty but we're delighted to get to the final." 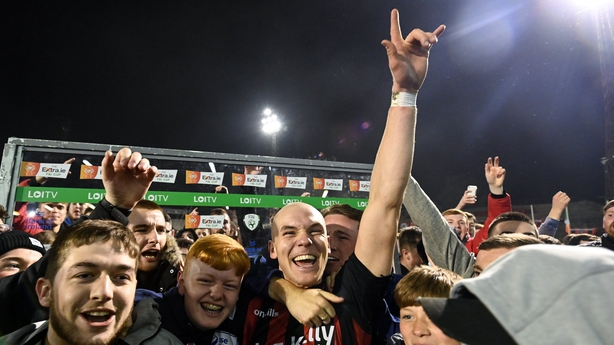 The Donegal native continued: "What it was all about, it's more about memories for people and for fans here and to get a big day out now in the Aviva with maybe 20,000 Bohs fans, it doesn't really matter what the result is.

"(The fans will) tell you different but it's all about that day out for me. That was what I was thinking. You want to make the season special and end on a high and thankfully we've done that. We're just delighted to get over the line."

On the penalty which was saved by Waterford goalkeeper Brian Murphy, Kelly admitted it was "definitely a penalty miss".

Brian Murphy concedes but then saves a penalty from Georgie Kelly to keep it Bohemians 0-0 Waterford in the #FAIcup semi-final at Dalymount. Live updates: https://t.co/5IY3chG6gd pic.twitter.com/VgymK3mzyI

"I meant to go high with it and ended up scuffing it down the middle, but I was delighted then to get the winner because I would have been sickened if that had cost us," he added.

On the winning goal, the 24-year-old said it followed a conversation with substitute Promise Omochere who delivered the telling cross for Kelly.

"I said to Promise as soon as he came on - and that's why he was laughing there after we scored - that once he gets half a yard, just to cross it early and I'll gamble across and he did it and it worked and it was the 88th minute, I'm just delighted."

Georgie Kelly strikes late and Bohemians have one foot in the #FAIcup final | Live updates: https://t.co/5IY3chG6gd Live on @RTE2 and @RTEplayer pic.twitter.com/pkMXjz6mng