There was intense scrutiny on the 1999 treble hero and his players heading into the Group F encounter after Saturday's chastening loss at Leicester compounded recent poor performances.

United were staring down the barrel of a fifth loss in eight matches and were booed by some fans as they trudged off at half-time trailing by two goals, only for Solskjaer's side to storm back memorably at Old Trafford.

Marcus Rashford struck on his first start since the Europa League final and Harry Maguire lashed home a leveller, setting up a box-office finish that Ronaldo delivered with a powerful header from Luke Shaw's cross.

The victory provided a much-needed boost for United, who moved top of the group and welcome rivals Liverpool to Old Trafford in the Premier League on Sunday afternoon.

The second-half comeback displayed the best of Solskjaer's side but they have plenty of room for improvement, notably at the back after Mario Pasalic and Merih Demiral capitalised on poor defending in the first half.

The Serie A side from Bergamo doubled their lead 14 minutes later when centre-back Demiral rose highest at the near post to turn in in a header from a Teun Koopmeiners corner. 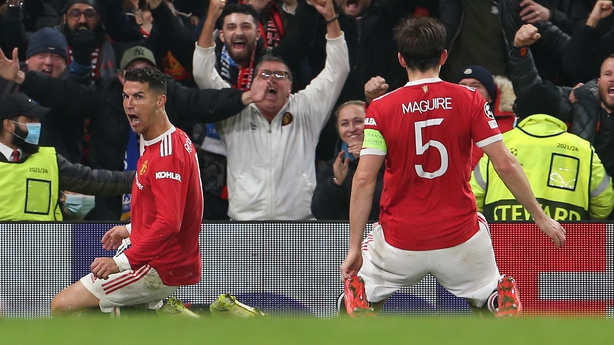 Fred and Rashford then missed good chances for United from close range before the break - Rashford's effort glancing off the crossbar - but the home side got themselves back into the game eight minutes after half-time.

A clever ball from Bruno Fernandes allowed Rashford to cut in from the left and he picked his spot with a shot into the opposite corner.

United hauled themselves level when Maguire finished well with a low first-time shot at the back post after the Atalanta defence failed to intercept a Fernandes ball across the box which was flicked on by substitute Edinson Cavani.

Luke Shaw then set up the winner when he put in an excellent cross from the left flank and Ronaldo rose to place a header beyond Musso.

The win means United top Group F on six points after three games with Atalanta and Villarreal two points behind.