Bernardo Silva is determined to maintain momentum after re-establishing himself as one of Manchester City's key players.

The Portugal midfielder expressed a desire to leave the club in the summer in order to get more game time and experience a different league.

Yet with no serious prospect of a move materialising during a difficult transfer window, the 27-year-old was left with the challenge of fighting for his place at the Etihad Stadium.

Handed an opportunity in the early weeks of the season, the former Monaco playmaker took full advantage and delivered the latest in a series of impressive performances in Saturday's 2-0 win over Burnley.

Manager Pep Guardiola believes Silva has been back to his form of the 2018-19 title-winning season and he now seems to be ahead of Raheem Sterling and Riyad Mahrez in the pecking order.

"It is tough when you don't play the minutes that you want to," said Silva, who opened the scoring against the Clarets.

"I am happy that I am helping the team and I am happy with the momentum but it is just the beginning.

"We are still in October. We need to keep going, try to go top of the league, try to qualify for the next stage of the Champions League now we are third in the group. It is the beginning but we are doing well."

City had won their previous four home games against Burnley 5-0 and another comfortable success seemed likely when Silva struck after 12 minutes.

It did not turn out that way as the winless visitors showed a spirit and resilience that belied their poor early season form.

It took a 70th-minute strike from Kevin De Bruyne to wrap up a hard-fought victory that kept City third, two points behind leaders Chelsea.

Silva said: "It was a tough game. After the international break most of the games are tough to play.

"It is never easy to win right after everyone comes back but it is a good win, three points, and now on to the next one. We need points."

City are next in action in the Champions League in Bruges on Tuesday. Brazilian duo Ederson and Gabriel Jesus, who were both in international action in South America on Thursday night, could return having been ruled out for the Burnley game. 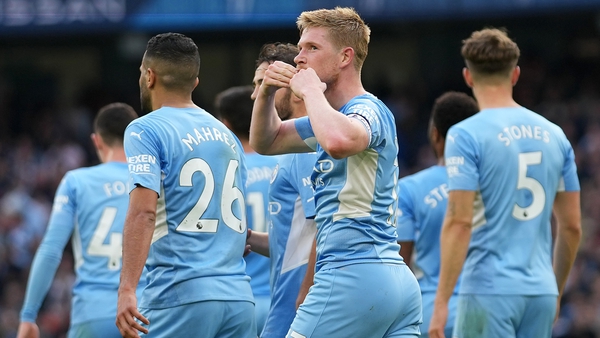