Georgie Kelly salvaged a point for Bohemians with a stoppage-time penalty to bring a fitful game to a dramatic finish at Dalymount Park.

Trailing to Sami Ben Amar's first-half goal, Bohemians’ got their reward for a far more industrious second half display in the first minute of added time.

Referee Damien MacGraith initially gave a free-out when Dundalk defender Dan Cleary clashed with Ali Coote on the edge of the visitors' area.

But after consulting with his assistant on the stand side, he changed his mind and pointed to the spot.

To add to the theatre, Kelly’s poor penalty squirmed under the legs of Peter Cherrie to roll into the corner of the net for his 19th league goal of the campaign.

In an energetic start to the game, Dundalk’s Michael Duffy failed to get enough venom in his shot to trouble James Talbot after working a one-two with Patrick Hoban to open Bohemians up two minutes in.

Despite passing the ball with confidence, the visitors were struggling to create much in front of goal. Likewise, Bohemians’ slightly more direct approach as the game laboured to really ignite.

But that it duly did on 28 minutes when Dundalk took the lead out of little or nothing.

Bohemians' left-back Tyreke Wilson’s weak header back to Talbot never got there as his goalkeeper then collided with the inrushing Hoban. 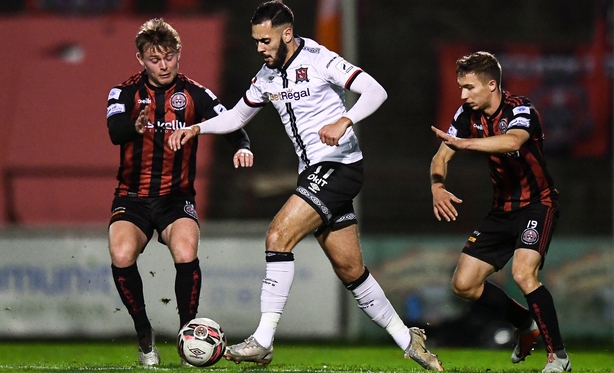 The ball bounced up kindly for Ben Amar for the Frenchman to nonchalantly lob into the unguarded net for his first league goal for the club.

Hopes of an immediate Bohemians response were thwarted by frantic defending from Dundalk after Promise Omochere and Ross Tierney combined encouragingly down the right.

With more of a cutting edge to Bohemians’ game on the resumption, Tierney sliced off target three minutes in after Kelly chested down Liam Burt’s pass.

Dundalk remained a real threat when they got forward, though, as the home side had to survive a couple of let-offs around the hour mark.

Greg Sloggett shot straight at Talbot after David McMillan nodded Will Patching’s corner back across goal.

With Bohemians furious they had not been given a free-kick, Sean Murray then toed over the bar after McMillan played him in on goal.

Keith Long's side kept pressing, Omochere bringing the save of the game from Cherrie on 63 minutes before Anto Breslin also worked the Dundalk keeper from the resulting corner.

The opportunity gone, Bohemians might have been two down seven minutes later, McMillan blazing over the top after Talbot could only parry a powerful drive from Patching before the late drama brought the home side their reward.