Caoimhin Kelleher has had to look on from the sidelines as Gavin Bazunu jumped ahead of him to claim the Ireland goalkeeper's jersey, however, the young Liverpool stopper has no regrets over the decisions he has made at club level as he looks to challenge Alisson at Anfield.

The Cork keeper will begin Tuesday’s friendly international against Qatar at the Aviva Stadium, and it will be the first time that Kelleher has started a game for his country.

Kelleher made his debut in the second half of the friendly with Hungary in June and put on a scintillating display between the sticks, while showing great composure behind the defensive line to keep a clean sheet.

Yet it is Bazunu who has established himself as the current Ireland number one, an opportunity afforded the young Dubliner on account of his club form, which has seen him spend the last two seasons on loan from his parent club Manchester City.

Kelleher is arguably further along than Bazunu on the club scene having established himself as Liverpool’s number two this season, and while that brings all the experience of training day-in, day-out with world class elite level players, game-time is sacrificed as a result.

"I think it’s a different situation for me anyway," said Kelleher, when asked about the competition with Bazunu and the fact that he was playing regularly.

"Liverpool want me to stay, I’m number two this season, and it’s a good position to be in, I think.

"Hopefully, it’s a chance to play some games and the opportunity to play at a high level.

"It's different for everyone, different individuals, it's different journeys, the way my career is going is completely different, so I don't have any regrets, I am happy to do what I do and how it has turned out.

"If I need to have a conversation about playing more games, I’ll have it. I’m in a good position where I am."

Before Kelleher nailed down the number two position at the Anfield club, there was talk of a loan deal to a Dutch club, however, injuries at Liverpool meant that the move fell through.

As it happens, Kelleher got a chance to move up the pecking order at the Merseyside club and has impressed when he has played for the first team, which has included a Champions League encounter with Ajax.

"And I think since I didn't go on loan, I got my chance with Liverpool and did quite well, I am second choice there so that's quite a big step for me."

Kelleher’s performances for Jurgen Klopp’s side resulted in a new long-term contract for the former Ringmahon Rangers youth.

And as a result, the new deal has given the 22-year-old the belief and ambition to push Alisson for that number one jersey in the future.

"There’s no point being somewhere and not thinking you could be number one," said Kelleher.

"You have to have that mentality and I want to push on and be number one. And hopefully if I get a chance, I’ll take it.

"I'm just trying to take it day by day at the minute; when I do get games for Liverpool, to put in good performances and show that I am capable of playing at that level.

"I’m just trying to keep consistent and keep pushing on, and hopefully one day I’ll get to that level." 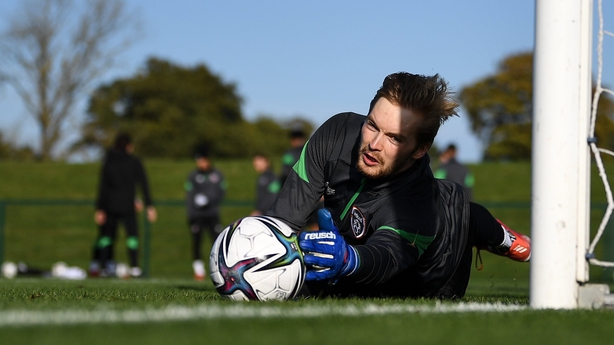 Looking ahead to the game in Dublin, Kelleher will be assured that it is not just a token appearance, as the manager has been full of praise for the keeper and believes that he deserves his chance.

"He played 10 times for me as under-21s manager, so I’m obviously well aware of his qualities.

"He did terrifically well, he was just unfortunate last season when he was injured, and that opened the door in March for Gavin Bazunu, who has been terrific.

"Caoimhin made his debut at half-time in the game against Hungary but this is his first start tomorrow and in front of the home crowd, so he deserves it."

Kelleher will be looking to replicate his club ambitions at international level by pushing Bazunu for that number one jersey, and he feels that there is a really strong unit in the Ireland squad, with Mark Travers also vying for the jersey.

And Kelleher says that he enjoys the competition and that all three young keepers are pushing each other on as they train together and help improve each other’s game.

"I am happy for [Gavin], I like to see him do well. The goalkeeping group is quite close, we don't wish anything bad to happen, we all train collectively together to get the three points and if he makes a save, I am just as happy as any player or fan watching.

"We have known each other three years maybe, since an under-21 camp and we all get on with each other.

"It’s only healthy for us and good for us. I like it, I like competition, it makes you better."