Two first-half goals from the forward, who had been in the spotlight throughout the build-up to the World Cup qualifier, handed Ireland a commanding lead at the break.

And while Ireland dominated throughout, they had to wait until the 90th minute before they could finally seal the win as Chiedozie Ogbene scored his first Irish goal on his competitive debut.

All eyes were on the manager in the build-up to the away day in Azerbaijan as Kenny was yet to record a competitive victory in 16 games.

And the opening two minutes of the game were symptomatic of Kenny's tenure, as two fine attacking moves worked the play into the Azerbaijan final third, however, the final ball from Robinson and then Daryl Horgan lacked quality and opportunities were wasted.

But Ireland kept the tempo high and dominated the opening exchanges and were rewarded for their attacking intent in the seventh minute.

Great play from back to front to back with Josh Cullen and James McClean proving influential as the ball was finally worked into the path of Robinson.

One touch to put the West Brom man en route to goal, before Robinson dug it out from distance with his left foot to guide the ball into the top corner.

It took the concession of a goal to kick-start the home side, and they finally got going in the tenth minute as Namik Alaskarov tried his luck from distance.

A similar well-hit effort proved effective in Dublin last month, however, this time Gavin Bazunu was behind the shot and saved with ease.

Azerbaijan grew into the game and won a corner, following good play down the right, and while the initial set-piece was cleared, the ball was worked back into the box to allow Hojjat Haghverdi a free header, but his effort looped over the bar.

Ireland were looking quite nervy at this stage, unable to get their composure back as they dealt with a good spell by the home side, with Kenny's men playing too many hopeful balls forward, giving away possession far too easily.

The home side maintained their positive approach and in the 24th minute, again had a look at goal from outside the box as Filip Ozobić’s shot forced Bazunu to go full stretch to his right, but the keeper made it look comfortable in the end.

Finally, Ireland got a chance to attack just after the half-hour mark, albeit on the counter-attack, as Idah was sent flying down the right flank. The clipped cross was half-cleared and dropped into the path of Robinson.

The goalscorer felt the confidence to take it on the full and hit a fine volley that dipped just over the bar. 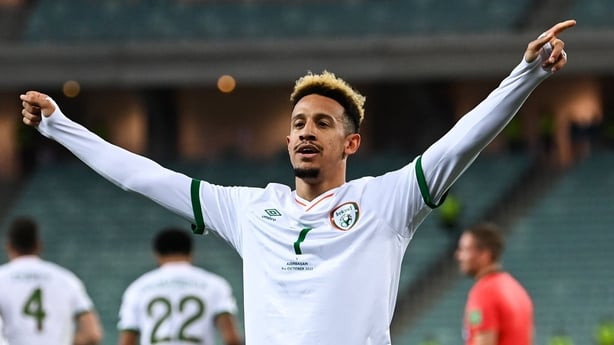 The home side, however, kept up the pressure and still reasoned their best route to goal was from distance as this time, the impressive Mahir Emreli found space down the inside left channel and while his strike was well hit, it flew wide of the near post with Bazunu seeing it to safety.

The second goal arrived in the 39th minute, against the run of play and just moments after Ireland had given the ball away again from their own throw in.

But this time, a strong John Egan challenge on the half-way line allowed Ireland to burst forward as Horgan guided the ball into the path of Robinson who burst forward.

The space opened up for the West Brom man, allowing him to try his luck once more from distance, and the result was the same, as the deflected effort beat Shakhrudin Magomedaliyev low to his left.

Azerbaijan looked to hit straight back, however, Gara Garayev’s long-range effort fizzed wide, and Ireland now looked a lot more comfortable on the ball with the two-goal cushion, as the composed play returned to their game, with Shane Duffy helping drive the team forward with some positive passing.

A late chance before the break almost materialised as Robinson lifted the ball over the top for Idah to chase, however, the keeper was alert to the danger and cleared, as the referee called a halt to the half.

Inside the opening minute of the second half, a hopeful ball down the right caused a bit of a commotion in the Ireland box with Shane Duffy slamming the ball off the diving Bazunu, however, the offside flag was eventually hoisted.

But Ireland were back on the attack in the 49th minute as James McClean linked up well with Robinson before bursting forward to work a shot on goal. The well-hit effort was blocked by Haghverdi, but the ball really should have been squared to Adam Idah in a much better position.

Gaps were starting to appear at the back as the home side pushed on, and while Robinson shot wide in the 51st minute, it should really have been three five minutes later.

A throw-in high up the right flank found Robinson who lifted the ball into the box for Duffy to attack, and it was as if he had too much time to make up his mind, mistiming his free header, which bounced the wrong side of the post.

Chances were flying in for Ireland as Robinson missed another chance to bag his hat-trick before substitute Chiedozie Ogbene made an immediate impact handing the goalscorer yet another chance, but the snap-shot flew wide of the near post.

In the 64th minute, Robinson stretched to head a cross just off target, but Ogbene was arriving behind and perhaps should have been more vocal to alert his team-mate.

Then a couple of scares for Ireland, as first a Abbas Hüseynov effort had to be touched over, and a VAR call from the resulting corner had referee Espen Eskås consulting the pitchside monitor, checking for a penalty.

Thankfully for the Irish, and Matt Doherty in particular, whose hand made contact with the ball, Mahir Emreli was eventually penalised for pulling the defender's shirt.

In the 73rd minute, Doherty arrived late at the back post to work a header goalwards, however, the connection was not pure and the ball hopped over the bar. 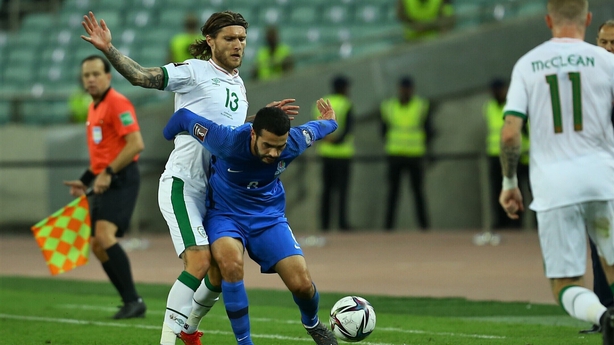 The home side were doing their best to make something happen and almost reduced the deficit in the 79th minute as Garayev latched onto Duffy’s half-clearance.

The swerving effort almost deceived Bazunu, who did well in the end to palm the ball onto the bar.

Two late chances for Ireland to seal the victory arrived from the aerial route with Duffy forcing the keeper into a good save from a corner, before Ogbene teed Robinson up but his point-blank effort was also kept out.

The third goal eventually arrived at the clock ticked towards the end of the 90 with Ogbene rewarded for a fine cameo as he rose well in the box to guide the ball home from the Josh Cullen corner to see Ireland record their first win of the campaign. 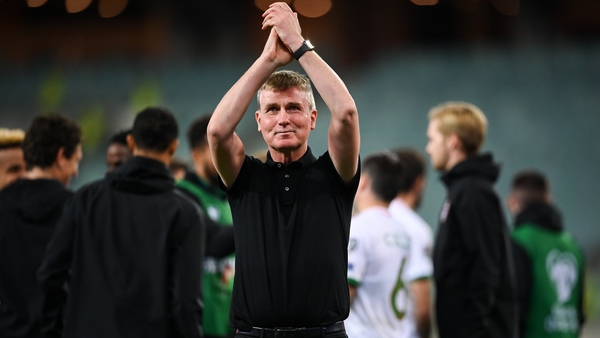