There were fireworks on and off the pitch at Oriel Park as Sean Murray hit a real banger to ease Dundalk's relegation worries with a huge win over Shamrock Rovers.

An engaging affair had plenty to discuss, including a pre-match demonstration by home supporters against the club's American owners with banners reading 'Support the Team, Not the Regime’ and 'We Want Our Club Back’ joined by those calling for PEAK6 and chairman Bill Hulsizer to go.

With four former players in the Hoops line-up the fans also threw fake money and a pig’s head onto the pitch in the opening stages.

While the long-term future of the Louth side remains up in the air, they certainly put in a shift for head coach Vinny Perth against the side of dethroned them as champions last season.

The goal dispatched by Murray on 32 minutes - his sixth in nine matches - was no more than they deserved and while Rovers had a series of chances before the break to get back into it, Dundalk deserve huge credit for shutting up shop in the second half to claim just their fifth clean sheet of the season and first since a similar result at home to Finn Harps in mid-July.

The result lifts them up to sixth in the table - albeit with a game more played than those around them - but crucially they are now five points clear of the dreaded promotion/relegation spot.

For Rovers, the loss is unlikely to do little more than delay their bid to retain the SSE Airtricity League Premier Division title as they remain nine points clear at the top.

Sean Murray is on the mark again to give @DundalkFC the lead against @ShamrockRovers #rtesoccer #LOI pic.twitter.com/wNDPKyDvag

Stephen Bradley will no doubt argue his side should have had a penalty in the early stages but while they may yet finish top of the pile, this Dundalk team showed there is still some fight left in the old dog yet.

The home side started on the front foot and could have taken the lead inside the opening 40 seconds when Cameron Dummigan burst up the right before slipping Patrick Hoban in but the in-form striker was just unable to reach it.

Darragh Leahy then went close to giving the Louth men the lead on six minutes when he latched onto a clever backheel from Michael Duffy to get a shot away but Lee Grace was back on the line to deflect it over.

Rovers then had strong penalty appeals turned down on 12 minutes when Aaron Greene broke to the endline on the right.

He was then taken out by Andy Boyle as he pulled the ball back to Richie Towell but the officials were caught ball watching as the former Lilywhites midfielder pulled his effort wide. 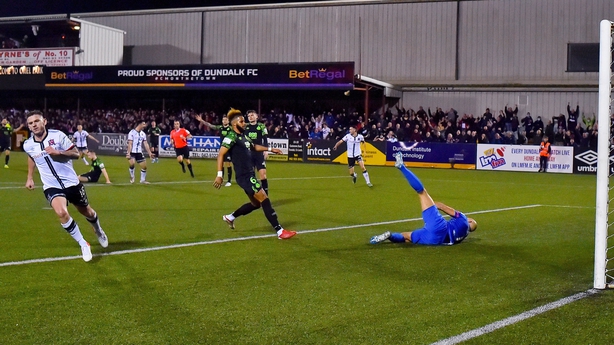 Barry Cotter had two half chances with from headers but firstly he fired tamely wide from a Dylan Watts corner before seeing his effort from Ronan Finn's cross deflect off Dummigan and into the side-netting.

Hoban then had an effort deflect off Cotter and comfortably into the arms of Alan Mannus before the breakthrough goal arrived on 32 minutes.

It started inside the Dundalk half as Will Patching sprayed a superb pass with the outside of his foot to get himself out of trouble.

Leahy then played it up the line to Duffy, who in turn found Hoban. He then slipped Murray in on goal with the former Watford man making no mistake with a composed finish past Mannus.

Leahy went close again four minutes later with an effort Mannus could only push clear before the visitors ended the half strongly with a series of big chances.

Firstly Danny Mandroiu blazed over after being played in on the right before Towell missed two big chances in quick succession - the first being blocked on the line by Murray before he volleyed wide from the follow up cross from Cotter.

Dundalk had another big let-off on 44 minutes when Greene’s back post header from Watts’ free-kick hit Peter Cherrie before the follow up was blazed over by Gary O’Neill.

The Scottish keeper then made a stunning save in stoppage time to keep his side ahead at the break when he sprung to his left to turn Watts’ effort around the post.

Rovers continued to pressure on the restart, winning a series of corners, but they failed to seriously threaten and quickly began to run out of ideas. 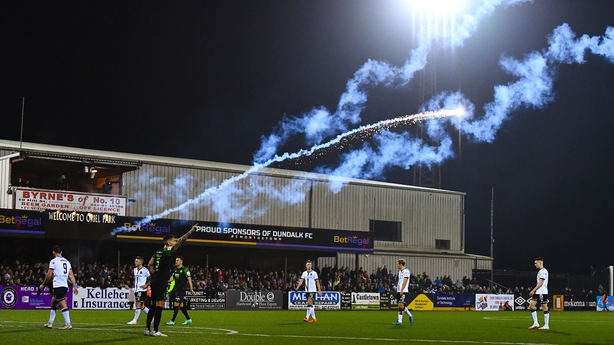 Indeed, it took until the 77th minute for them to have a real chance of note when substitute Rory Gaffney tried his luck from wide on the left only to see it flash over.

Leahy went close again four minutes later when he met Duffy’s corner at the near post only to see his header dip just over.

Substitute Sami Ben Amar had a great chance to wrap the game up within seconds of his introduction on 86 minutes when he was played in on the right but the Moroccan blazed over.

It mattered little as the hosts weathered the storm in style to claim a morale-boosting win in a season often beset by lows.