Chiedozie Ogbene turned his back on the chance of being a county star in Cork to chase his dream to become a professional footballer.

Coming through the ranks at the renowned Nemo Rangers GAA club, Ogbene was already a star of the Under-21 side at 18 when he had to choose which path to take.

At that stage, the talented teenager was on the books of Cork City, and when it came down to it, Ogbene had to choose between a county final or an away day with City.

In the eyes of the Gaelic football team-mates, Ogbene opted for the road less travelled, which took him to Dublin for an away day at the oft-desolate UCD Bowl.

However, the journey onwards would gather momentum and lead to a spell with the high-flying Cork City first team, who were challenging for league honours in 2016 and culminated in an impressive cameo appearance in the FAI Cup final, where the Turner's Cross side beat Dundalk.

Ogbene would not move through the ranks at Cork as he had hoped and moved on to Limerick the following season before heading across the channel to sign for Brentford in 2018.

But it was the following year, at new club Rotherham, where Ogbene started to establish himself as a regular first team player and help his new side to promotion to the Championship.

A year on from declaring for the Republic of Ireland – Lagos-born Ogbene could also have represented Nigeria - Stephen Kenny brought him into the squad for the end-of-season training camp last summer.

Ogbene would then make his Ireland debut, coming on as a substitute, in a friendly international against Hungary, where the energetic attacker brought real flair and intent into the Irish forward line.

"It was a special moment for myself and my family," said Ogbene, who became the first African-born player to represent Ireland.

"I obviously had a different journey, my father had a job opportunity in 2005 to bring his family here and I grew up in Ireland, in County Cork.

"I learned the culture, integrated with the system. Stephen [Kenny] actually wanted me to declare for Ireland.

"I showed interest and there were a lot of complications with the registration and how I came into the country.

"To carry that burden of being the first African-born player is very special and I can see how proud it has made my family and you see the people of Cork and those I work with, it's priceless."

Ogbene’s path could have painted in Stars and Stripes had his father opted for the other job opportunity that presented itself back in the early years of the new millennium.

A job in Florida was turned down, as the Cork suburb of Douglas became home for the Ogbene family, and the fact that Chiedozie went to school a mere stone’s throw from Turner’s Cross perhaps proved that the "ground ball" was always most likely to be pursued.

Ogbene missed out on the September games with Ireland through injury, however, he was named in the 26-strong unit for this week’s game in Azerbaijan, which shows that the manager believes he can be a key player in the current squad.

"I'm guessing the manager sees something special in me," said Ogbene.

"God has blessed me with some pace, and pace and power can cause trouble on defences.

"The more that you can attack and take pressure off the defence, that is what I try to do, creating problems high up the pitch and hopefully get a goal for myself or set up a goal.

"I have always said that the competition and the players he can choose from are top class. So to select me and leave players out, is something I take pride and joy from.

"I just hope that I can repay that with my display. I'm trying to do my best for the nation and try to help the team to win points and have a good camp.

"We all have one goal and it's to try to win as many games as possible, have a winning mentality and also create a culture of winning in this nation." 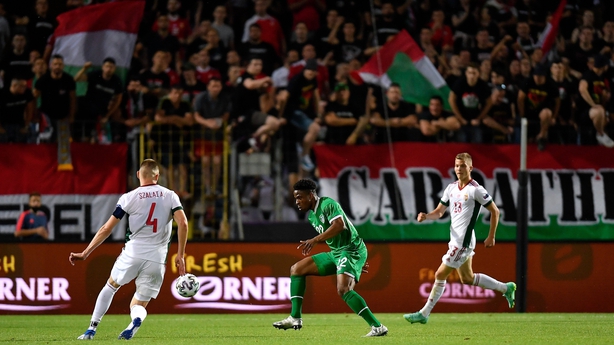 Ogbene has a chance to impress in Azerbaijan and stands a very good chance of featuring as the manager will name a very attack-minded side as he looks to secure his first competitive victory.

And the Cork exile, now living in England, is very happy with the decision his father made all those years ago, although there were some dark winter nights when he pondered what might have been had the family ended up in the sunshine state of Florida.

"When you get older and you go through winter days and you’re thinking: 'Dad, what made you come here?’" said a smiling Ogbene.

"I guess it was the best decision that he made for his family and I’m reaping the rewards for being here.

"Ever since I’ve been in Ireland, I’ve really enjoyed it and you can probably hear my Cork accent coming and going.

"The people around me and the people I grew up with are very supportive and my school keeps in contact with me and [I know] how proud I make them.

"I had to make a big sacrifice at 17 to sacrifice GAA, which was a big step in my career, and I had a lot of heated moments where people thought I wasn’t going to make it.

"For people to see me now I’m inspiring other kids and I take pride and joy in that."

And while Ogbene may never have had the privilege of representing the Rebel County, there is a local celebrity in the family, and one that always calls the young footballer after every match.

"After I made my [Ireland] debut, the first person I rang was my mum; my mum rings me every game I play.

"I have great support from my family ,and I love my friends from Cork.

"She was very teary. I could tell by the emotion in her voice. My parents take pride when their kids do well. Where we come from in Cork, a lot of people notice her and they ask about her, so she feels famous!

"I can see how happy it makes her and she answers questions, so she feels very important, and she always dreamed of me helping her and being recognised and I hope I’m doing my best."

'One aim, to cause havoc' - Ogbene buzzing after debut and wants more