The Republic of Ireland travel with a very strong squad to face Azerbaijan on Saturday, with just one small injury concern ahead of Wednesday's departure.

Ryan Manning is nursing a slight ankle issue, but otherwise a fully fit squad will travel for the World Cup qualifier in Baku.

Ireland’s World Cup campaign has been disappointing with just two points gained from five matches, which included a shock home defeat to Luxembourg and an equally disappointing home draw with Azerbaijan.

Stephen Kenny’s side now go in search of a first competitive win for their manager, and will be hoping to secure all three points on Saturday.

The manager would not admit to the game being categorised as a must-win encounter, as he didn’t want to dwell on the negative aspect of the game.

But Kenny did state that the main objective is to win the match and referenced the two previous away games where Ireland scored first as a template for his side’s approach in Baku.

Obviously, Ireland lost both those games in Serbia and Portugal, however, the manager is confident that they can right those wrongs in Azerbaijan.

"The only issue we have at the moment is Ryan Manning," said Kenny, speaking at Tuesday’s press conference.

"He has a sore ankle. We’ve scanned it so we’ll see how it goes. It’s the only issue and we’ll wait and see how he is.

"I can’t dwell on the negative aspect of what happens if we don’t win.

"We just have to focus on trying to win the game, that is our objective. I think the players' attitude has been excellent, the spirit is excellent, but we have to turn that into wins." 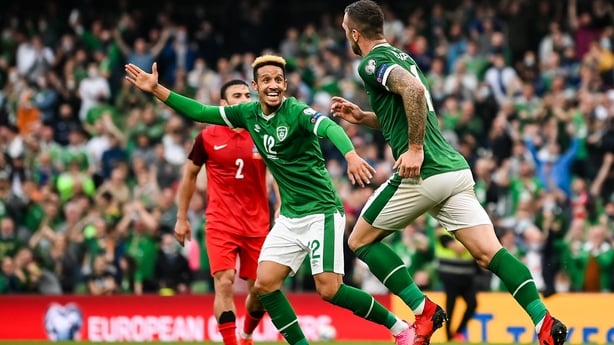 Kenny confirmed that Shane Duffy and Aaron Connolly had joined up with the squad and had trained earlier in the day.

And the manager appeared satisfied with the amount of time that he gets to work with the team in this international window, with just the one competitive fixture, compared to three in September.

"In two of the previous away games we had players playing on Sunday, for example, and then away to Serbia on Wednesday and away to Portugal on Wednesday, so you just had one day [training].

"So this has been different. We’ve had two training days.

"We fly tomorrow, so that is consumed with the eight-hour flight and the travel time.

"And then we train in Azerbaijan on Thursday and Friday, and hopefully our preparations will be good and we’re looking forward to the game.

"Obviously, we want to win the game, that’s the objective. We feel that the team is evolving and we want to put in a strong performance and get the victory that we desire."

Ireland dominated the opening exchanges in the reverse fixture in Dublin, but failed to take their chances.

And then Azerbaijan first frustrated Kenny’s side by holding onto the ball and killing the tempo, before striking a goal against the run of play just before the break, leaving Ireland with an uphill task of getting something from the game.

Ireland again dominated possession in the second half but it took them 42 minutes to restore parity and they then ran out of time when going in search of a winner.

So what must Ireland do differently to get the three points against the perceived weaker side on Saturday?

"We need to improve on our first-half display," said Kenny.

"In that game where we came out of the blocks brilliantly in the first 15 minutes, we created three good chances and we should have been ahead, and we didn't take them.

"Then Azerbaijan retained possession really well in their own half for periods, so we needed to modify our pressing strategy around that and be better out of possession than we were in the second half of that first half.

"We weren't cohesive in terms of our out-of-possession strategy, we didn't get after Azerbaijan collectively in the way that we could have.

"Second half, we increased the intensity of our play, I feel, and we really pushed on to them. They retreated, defended deeper, which inevitably led to space in wide areas – we ended up with a lot of crosses.

"We had a high number of crosses in the game and we had some good chances in the game from crosses – and Shane Duffy scored from a cross, of course – but we didn't take a lot of the chances that we had."