Gavin Bazunu's decision to go out on loan over the past two seasons has paid dividends, however, the highly-rated goalkeeper is well aware that there are big decisions coming down the line that may affect his current status as Ireland's number one.

The Manchester City youngster broke into the Ireland squad since moving to Rochdale last season and made Fratton Park in Portsmouth his home for the current season. His consistency between the sticks led to his elevation into the starting XI for Stephen Kenny’s side in the home tie with Luxembourg in March.

One of the very few positives to take out of that disappointing defeat to Luxembourg was Bazunu’s composed performance, and it has led to seven straight games as the Ireland number one.

Fellow international keeper, Caoimhin Kelleher, appears to be ahead of Bazunu in terms of club progression, as he is now the number two keeper at Liverpool.

However, the fact that Bazunu is playing week-in, week-out in the English League essentially leap-frogged him over the equally excellent Kelleher on the international front.

Bazunu looks set to stay at Portsmouth for the remainder of this season, however, the 19-year-old, whose stock rose considerably in recent matches against Portugal and Serbia, may have difficult decisions to make at the end of the season.

Promotion to the first-team squad at City could boost Bazunu’s profile further, however, it could then hamper his international chances as, like Kelleher, he would be missing out on regular first-team football.

"My opinion was always game time," said Bazunu, when asked which was better for international chances, and when compared to Kelleher’s situation.

"That was most important and it's why I went on loan to Rochdale and now Portsmouth.

"I'm 100% sure that I wouldn't be anywhere near the position I am now without having that backing of games and having that experience and this confidence, just because of the amount of games that I've got under my belt.

"For me, playing games is the most important thing."

And while Bazunu believes his best route forward in the game is by playing regular football, he understands that he may have decisions to make should the City conundrum present itself.

"That's the difficult, possible next step to my career where I have to make a decision there," said Bazunu.

"I've not made a decision on that yet but my priority will always be to try and get as many games as I can, because at the end of the day I don't want to be sitting on the bench, I want to be out playing week in, week out if possible.

"But if the best thing for me is to be in or around the squad learning every day and training with [goalkeeping coach] Xabi [Mancisidor], if that's my best opportunity to become Manchester City number one then I'd have to consider that in the future.

"Going out on loan, you get a chance every week to prove yourself and to be in the manager's eye, and the goalkeeping coach's eye, for them to see you and to continue to back up performances.

"So like I said, I've to make that decision further down the line but my priority will always be to try and play week in, week out wherever I am." 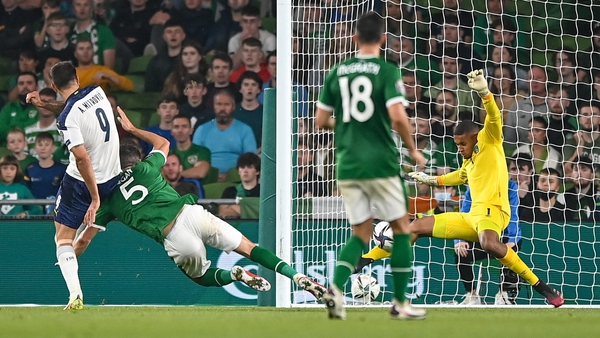 Bazunu delighted after a busy night between the sticks for Ireland