Bruno Fernandes says Manchester United have to do much better if they are to win silverware this season after Ole Gunnar Solskjaer's side stumbled to a home draw with Everton.

While in a stronger position than they were at the same stage last season, the Red Devils failed to build on the feelgood factor of Wednesday's last-gasp Champions League victory against Villarreal.

Cristiano Ronaldo was Wednesday's match-winner but was on the bench on Saturday lunchtime, when United went into half-time ahead through Anthony Martial's first club goal in eight months.

Everton had threatened before that and Andros Townsend levelled midway through the second half, with Yerry Mina denied a memorable winner having been ruled offside by the video assistant referee.

"We should win this game," the Portugal international told the BBC. "We should create more chances.

"We should not concede that kind of goal. It's not the first time and we have to look at our mistakes and see what we can do.

"We don't look at the league table at this moment but of course we should have more points. We drop points at home and we should not do that.

"These last two games at home was not good enough in the Premier League.

"If we want silverware at the end of the season we have to do much better." 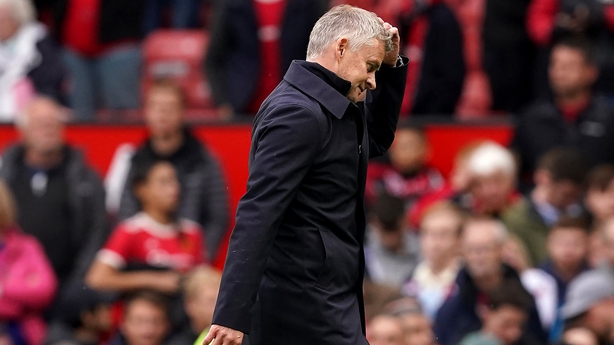 United have not won a trophy since 2017 and are already out of the Carabao Cup following the recent home loss to West Ham.

Solskjaer retains a calm focus amid mounting scrutiny but knows there are improvements to make over the international break.

"Every game is a big game at Man United, so it's a big month," Solskjaer said with October trips to Leicester and Tottenham bookending the Champions League home clash with Atalanta and visit of rivals Liverpool.

"It has been a big month. Lots of changes have happened at the club in the last month, so we've just got to be focused, make sure we use the international break well, us as coaches, who stay at home.

"The other ones who go away with their national teams come back with energy again, clear focus, good mindset and do well.

"But the mindset is good, the players are hungry to improve and today we dominated the game, we just couldn't get that second goal that you need in games like this because Everton, as we knew from last season, can score a goal from nowhere."

Solskjaer was left "a bit deflated and disappointed" by the draw but had no regrets about leaving Ronaldo out of the starting line-up on Saturday, when his team struggled to deal with opponents on the break again.

"When we conceded that counter-attack, we were in total control, dominated the game," the United boss said of Everton's leveller.

"Well, I can't say total control because we conceded a goal from a corner that we had.

"There was still four players behind the ball and we should've dealt with it.

"That was same case against Villarreal. We had a few too many counter-attacks against those and that's definitely something that we need to work on."

It was an impressive move ended with a fine finish by Townsend, who produced a Ronaldo-style celebration after sealing Rafael Benitez's men earned a deserved point.

"I think it was brave because we have some players that they are not playing with us and the other players have too many minutes and are a bit tired at the end," the Everton manager said.

"But I think overall it was a great performance. The team was doing really well in defence and on the counter attack.

"We had the chances we wanted and it was a pity because we can be happy with one point but it could be even better."