Ole Gunnar Solskjaer wants his Manchester United players to carry the momentum of Wednesday's Champions League win over Villarreal into Saturday's clash with Everton - but voiced frustration that the two games are so close together.

Cristiano Ronaldo's stoppage-time strike at Old Trafford saw United come from behind to register their first points of this season's Champions League campaign.

Having lost three of four games going into the fixture, United might have wanted to bottle that feeling at full-time and move quickly on to the next one. Just not, Solskjaer said, quite as quickly as this.

"The boost and energy you get in the group after a win like this has to be built on," he said.

There's no common sense at all

"It's a very, very quick turnaround, Wednesday night and Saturday morning, but the players are not going to get caught out by it and we need to start as we finished on Wednesday night."

Solskjaer's frustrations are nothing new. United faced an even more difficult situation against Everton last season when they played away in Turkey in the Champions League on the Wednesday night, losing 2-1 to Basaksehir, but flying home and winning 3-1 at Goodison Park in the Saturday lunchtime kick-off.

"We had no explanation, but it's TV of course," Solskjaer said. "There's no common sense at all. We had the same scenario last season when we were in Turkey and came back and played.

"We had that joy last year and we have to make it happen. The crowd are going to have to help us.

"Us and Chelsea both played on Wednesday and could have easily played on Sunday while City-Liverpool could have been on Saturday.

Solskjaer was not the only one feeling frustrated at United, with Donny van de Beek's despair at a lack of playing time growing as he was left on the bench again on Wednesday night, instead seeing Jesse Lingaard and Fred brought on as substitutes. 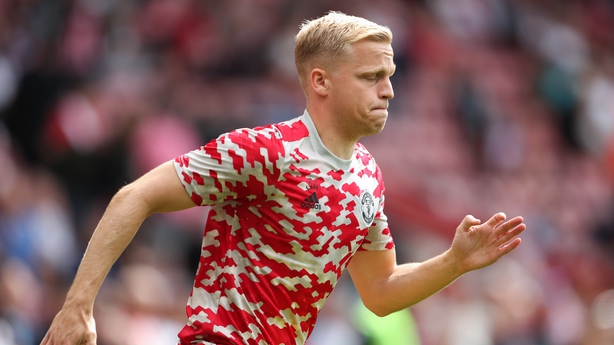 Last year's £40million signing from Ajax has started only two of nine games this season. Though Solskjaer said there was no problem with the 24-year-old showing some frustration, he warned it could not go too far.

"I've been a sub more than anyone at this club probably and you have to be ready all the time," he said. "I've been unhappy a few times. I understand the frustration. Every player is keen to play, that's got to be built into energy and determination for when you get on and show me."

"It's not just Donny, it's all players. I've got a squad of internationals and if we're going to be successful we need positive energy, no sulkers.

"Donny has never affected his team-mates negatively. As soon as I see players affecting the team negatively then that's a different scenario and I'll probably be firmer."

Though Harry Maguire will miss the Everton clash and perhaps Luke Shaw too, United got good news on the injury front on Friday as Marcus Rashford took part in full training for the first time since his shoulder surgery, though he still needs time to build up fitness.

"There were a few tackles flying in on him but he seemed OK, which was nice to see."