Alfie Lewis was the matchwinner as Pat's were involved in late drama in front of the television cameras for the second week in succession. However, this time, it was them celebrating after last week’s crushing late loss to Shamrock Rovers.

The midfielder’s shot found the top corner in the 94th minute as Drogheda United were the ones to suffer late heartbreak this week. The result leaves them perilously close to the relegation playoff scrap.

United lined out with both David Odumosu and Killian Phillips in their starting selection. Both players have been named in Jim Crawford’s extended Republic of Ireland squad for their European Championship qualifying double header next week.

Pats own young guns – Darragh Burns and James Abankwah – were selected once again. Both players played no part in the Saints’ UEFA Youth League tie against Crvena Zvezda earlier in the week, with the duo deemed necessary to first team matters.

Phillips lined out in midfield with Gary Deegan suspended once again. Boss Tim Clancy was also confined to a seat in the stands as United looked to bounce back from defeat in Waterford last week. Prior to that defeat, they enjoyed an upturn in form has kept their heads above the murky relegation waters for now at least.

FT: Drogheda 0-1 St Pat's
Drama at the death at Head in the Game Park, as an Alfie Lewis wonder goal snatched all three points for St Pat's. #RTESoccer

The men from Inchicore had won four of the last five meetings with the Drogs – but defeat on their last visit to Head In the Game Park back in May pointed to how dangerous United can be on their day. Inconsistency has been Saints’ downfall in recent weeks. They had won five and lost five of their last 10 league outings prior to their trip Boyneside – scoring 16 and shipping the same amount.

If Stephen O’Donnell and Alan Mathews consider their team as the 'Even Steven’ of the Premier Division, they don’t draw that often. Only Waterford have drawn fewer games than Pat’s five this term.

Pats put in a commendable display against Rovers last week, only to fall to that injury time own goal. It was a game they could have won to inject some, if not much, intrigue, into a title race of-sorts in the final stretch of the season.

Away to Drogheda, Pats were looking to put on another show for the watching television audience. For the second week in a row, they were entertaining the masses in the prime-time slot as the camaras made a rare appearance at the Windmill Road venue.

The first half was short of action in either penalty area. Mark Doyle burst into the box early on, only to have his effort blocked. Chris Forrester dragged a shot across goal in response.

Saints’ player of the month Darragh Burns was the liveliest player on either side. The 19-year-old showed some excellent touches, albeit nothing that threatened the Drogheda goal in the opening 45 minutes.

"Rovers have done us twice at home so it's good to get a late winner and celebrate in front of the fans..." - Player of the match Darragh Burns said it was all about Alfie Lewis' strike at the death. pic.twitter.com/CugZAE4Iuo

After the break, Pat’s upped it. Ronan Coughlan should have directed a anywhere but into the midriff of Odumosu. Mattie Smith then tested the goalkeeper before Forrester’s shot was blocked on the line by Joe Redmond.

In the build-up, the irrepressible Burns surged past Conor Kane on the byline.

A notable introduction in the second half was Lee Desmond, making his first appearance in six weeks since his horror head injury sustained against Waterford.

Ben McCormack squandered a big opportunity late on and it looked as if Pat’s might have to settle for a point. That would have suited Drogheda too, given the result in Ballybofey, but Lewis had other ideas. 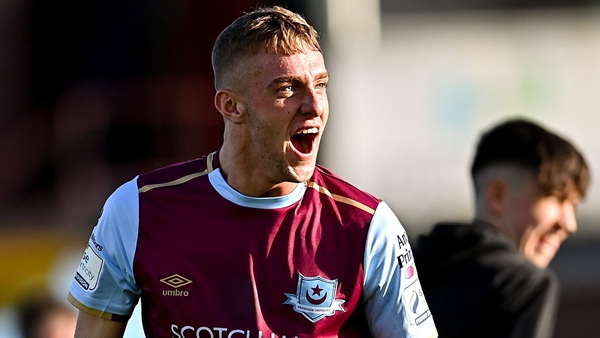